O is for Oasis 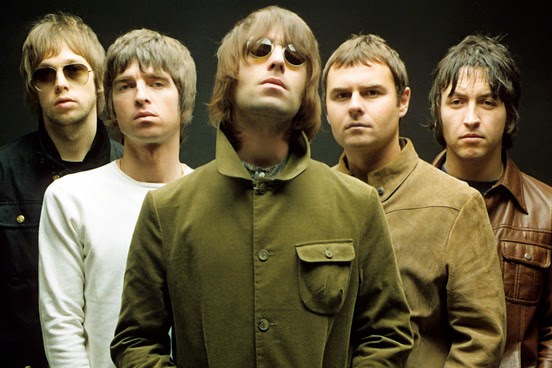 Oasis were a British rock band made up of brothers Liam and Noel Gallagher, Paul "Bonehead" Arthurs, Paul "Guigsy" McGuigan, and Tony McCarroll. Their debut album, Definitely Maybe, was released in 1994. It was met with rave reviews, garnering praise for its departure from the stylistic trappings of the then-dominant grunge movement. It debuted at #1 on the UK album chart, breaking the record for fastest-selling album.

Their second album, (What's The Story) Morning Glory?, was released in 1995. It contained the hit singles, Some Might Say, Roll with It, Wonderwall and Don't Look Back in Anger. The album was a bigger success than their first, although it scored comparatively weaker reviews. It remains their most successful album till date, with more than 22 million copies sold.

Their third album, Be Here Now, became the fastest-selling album in the UK in 1997, even though it didn't match the sales of their previous album. That trend would continue with their subsequent albums, Standing on the Shoulder of Giants (2000), Heathen Chemistry (2002), Don't Believe the Truth (2005) and Dig Out Your Soul (2008), all of which debuted at #1 on the UK album chart.

The Gallagher brothers are known for their long-standing feud. This has led to either brother dropping out of numerous shows and tours, and would eventually lead to the band's dissolution in 2009. But their music continues to be recognized as some of the finest to come out of the UK. This includes one of their biggest hits, Don't Look Back in Anger, which was ranked #1 by NME on their list of 50 Most Explosive Choruses.