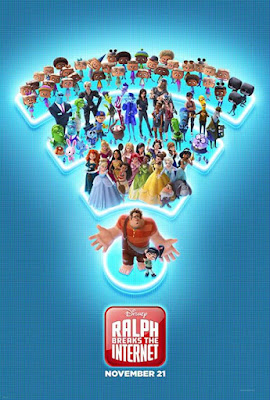 There have been quite a few movies in recent years that were heavily influenced by video game culture. Some were decent enough (like Ready Player One earlier this year), while others were not so much (I'm looking at you, Pixels starring Adam Sandler). But none of them were as successful at creating that perfect blend of nostalgia and humor as 2012's Wreck-It Ralph. The fact that it managed to tell a heartfelt story about a video game baddie that wanted more than the hand that he had been dealt while doing so was an accomplishment on its own.

Set 6 years after the events of the first movie, Ralph Breaks the Internet centers upon the friendship between the titular baddie turned hero (John C. Reilley) and Vanellope von Schweetz (Sarah Silverman), a bratty but adorable go-cart racer and ruler of the video game kingdom, Sugar Rush. This time around, it is Vanellope that begins to desire more from their life of routine. Her wish comes true when she and Ralph are forced to leave the safety of the arcade and journey to the Internet, where they hope to get a replacement part for the Sugar Rush arcade cabinet before it is unplugged.

The duo would soon find out that the Internet is not for the fainthearted, with its busy highways and aggressive popup ads. This is especially so when they venture into the online racing game, Slaughter Race, where they hope to earn enough money to buy the part they need by stealing a car owned by Shank (Gal Gadot), a hotshot racer and leader of a crew of street racers. Vanellope is immediately attracted by the high-speed thrills of racing in Slaughter Race, and this would serve as a catalyst for a series of events that would test her friendship with Ralph to its limits.

As much as I loved Wreck-It Ralph, I have to admit that that love pales in comparison to my love for its sequel. Ralph Breaks the Internet takes everything that made the first movie great and expands upon it, scratching my nostalgia and fanboy itches in the process. Much like the first movie, the sequel is chuck full of cameos and pop culture references. These included characters from Star Wars, the Marvel Cinematic Universe and, in my favorite bit, Disney's own stable of Disney Princesses. The fact that they were all voiced by their original voice actors lent a level of authenticity to their inclusion that made them feel integral to the story.

And in the midst of all that fun and humor, the writing team still manages to tell a cautionary tale that explores our overdependence on technology and our obsession with social media trends. Put simply, the movie is not only one of the best-made animated films in recent memory, it is also one of the most important, and as such, deserves a Best Animated Feature nomination at the forthcoming 91st Academy Awards. Hopefully it doesn't get robbed of the award like the original was.
Posted by Michael Abayomi at 10:50 2 comments: 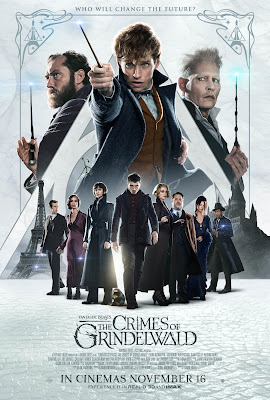 I confess, I wasn't particularly keen on the first Fantastic Beasts movie, even though I am a Potterhead and I loved all the books and movies that preceded it. The idea of spawning an entire film series out of what was essentially a fictional textbook sounded too much like a cash grab to me. Thankfully, we had J.K. Rowling herself penning the screenplay, lending some much-needed authenticity to the project. And she returns along with veteran series director, David Yates, to give fans another glimpse into her "Wizarding World" in the second installment of what is now a 5-part series.

Fantastic Beasts: The Crimes of Grindelwald opens with the titular dark wizard (Johnny Depp), who'd been imprisoned at the end of the previous movie, escaping captivity during a transfer to Azkaban prison. We soon learn that he is still after Credence Barebone (Ezra Miller), the powerful Obscurial who was responsible for much of the death and destruction in the first film. Also searching for Credence is Albus Dumbledore (Jude Law), a Hogwarts professor who enlists the help of one of his former students, Newt Scamander (Eddie Redmayne), to find him.

To do so, Newt must travel to Paris through unconventional means, having been banned from traveling by the Ministry of Magic, following his involvement in the events of the previous film. He is accompanied by his good friend, Jacob Kowalski (Dan Fogler), a Muggle (No-Maj? Can't-Spell?) whose memory was wiped at the end of the last film but has since been regained. They run into Tina (Katherine Waterston), Newt's love interest, and Yusuf (William Nadylam), a mysterious wizard, and they must all work together to find Credence before Grindelwald finds and uses him to bring about his vision of a new world order.

Fantastic Beasts: The Crimes of Grindelwald attempts to deepen the Harry Potter lore while also setting up events for the subsequent parts yet to come, but in so doing, it fails to capture the imagination in the same way its predecessors did. Much like the first film, the movie lacks that "magic" that made the Harry Potter books and movies so great to begin with. It tries to make up for this with callbacks to those movies, and I'll admit, it was nice seeing a young Dumbledore teaching Defense Against the Dark Arts. But those moments were few and far between.

The fact that it felt like there was so much setup going on also didn't help. This is one area where I wish the story had been told in the form of books instead, to allow its various characters and plot lines room to breathe and develop. In its current form, the whole thing feels like a heavily convoluted race towards a finish line that is still at least three movies away. All that said, the movie still offers enough of the high production values and great performances that fans have come to expect, so it is definitely worth checking out if you happen to be one.
Posted by Michael Abayomi at 10:26 5 comments: