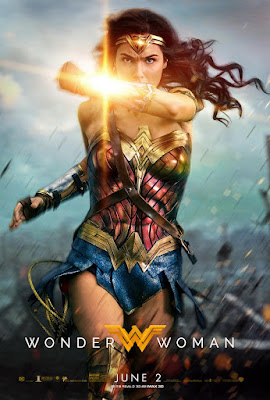 From the moment I saw the teaser trailer for Wonder Woman last year, I could tell that the DC Extended Universe was about to receive a much-needed win. This was after they'd released a string of superhero tentpoles that were largely panned by critics, and divisive among fans. Regarded as the most anticipated movie this summer, Wonder Woman proves that a more traditional approach to superhero filmmaking can still result in something that ultimately transcend the conventions of the genre.

Set during the events of World War I, the movie provides the requisite backstory we'd expected after Wonder Woman's appearance in Batman v. Superman. As such, the entire film is presented as an extended flashback triggered by the same photo of her she'd been trying to retrieve in that movie. We are introduced to Diana (Gal Gadot) as a child living on the island paradise of Themyscira, where she and her fellow Amazons, a race of warrior women created by Zeus, are shielded from the world of man.

Eager to become an Amazonian warrior herself, Diana begins her training in secret, through the help of her aunt, General Antiope (Robin Wright). This was against the wishes of her mother, Queen Hippolyta (Connie Nielsen), who'd told Diana the story of how the god of war, Ares, had defied his father, Zeus, killing the other gods and leading mankind down a path of war and destruction. Zeus had ultimately defeated Ares, and with the last of his strength, left the Amazons in care of a weapon capable of killing a god, should Ares return someday.

Things are set into motion when a fully-grown Diana rescues an American soldier, Steve Trevor (Chris Pine), from a plane that crashes near her island. He'd been shot down and is closely pursued by a ship of German soldiers, bringing their fight to the shores of the Amazonian island. The Amazons intercept the invading army, defeating the Germans, but not without suffering some loses. Steve is interrogated thereafter, and under the influence of the Lasso of Truth, reveals that he'd been a spy in the German army, where he'd stolen information that could help end the ongoing war.

Convinced that the war is an act of Ares himself, Diana decides to leave her island with Steve in a bid to find and defeat the god of war, defying her mother's wishes once again. They arrive at London, where she struggles to blend in and conform to the rules of a male-dominated world. But it isn't until she is taken to the trenches of No man's land does she witness firsthand the full horrors of war. And it is there that she starts to embrace the possibility of a greater calling.

Wonder Woman is a fine example of a superhero origin story done right. Rather than just settle for being yet another eye candy extravaganza full of explosions and skimpy costumes, the movie attempts to do something impactful with its source material, and succeeds. The fact that it is beautifully shot also helps, its colorful palette and tone standing in stark contrast with the greys of the previous films in the DCEU. Hopefully some of that color and warmth spill over into the forthcoming Justice League movie.
Posted by Michael Abayomi at 22:05 8 comments: