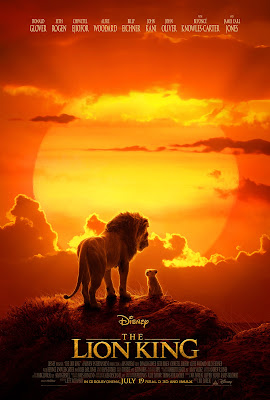 The Lion King was without a doubt the best animated film produced during the Disney renaissance and it remains one of the greatest animated films of all time till this day. This was not only due to its powerful story with themes of redemption and accepting ones destiny, but the realization of that story through some beautiful, hand-drawn animation, memorable dialogue (brought to life by amazing voice acting), and some truly awesome music. Simply put, it was always going to be tricky, remaking such a beloved classic.

But Disney had already proven that they could pull this off with their 2016 remake of The Jungle Book, a movie that not only updated its classic tale for a modern audience, but even managed to improve upon it in several ways. So when it was announced that that movie's director (Jon Favreau) would be tackling a classic as timeless as The Lion King next, we accepted the news with high hopes and a measured dash of skepticism. Unfortunately, his latest effort lacks much of what made his other remake so great, even though (or perhaps because) it follows its source material so faithfully.

The 2019 version of The Lion King sticks to its forebear so closely that it is almost pointless for me to recap its plot for this review. I mean, this is a movie we all saw back in its day as kids (or kids at heart). And even if you haven't revisited the original since then like I did before seeing the movie, chances are you would still be able to recite much of its dialogue or sing along to its memorable songs. So I'll focus instead on what I did happen to like about this version, and what I think went wrong with the remake.

First off, this new Lion King looks absolutely stunning and it should rightfully stand as a benchmark and indicator of just how far computer-generated imagery (CGI) has come over the years, much like The Jungle Book remake before it. The movie looked almost photo-realistic and was filled with so many breathtaking details that it often felt like I was watching a live-action recording of animals in the wild. But in their pursuit of realism, the animators have lost much of what made the original film so magical: the expressiveness of its animated cast of characters.

A prime example of this would be the character of Scar, who is ably voiced in this version of the movie by Chiwetel Ejiofor. In the original, Jeremy Irons' voice-over was perfectly matched by the animation, with exaggerated gestures like the arching of his eyebrow or the curling of his lips in a sneer helping to bring the performance to life. Here, the integration of the voice-overs felt like it came in after the fact, like the voices were simply overlaid over the too-real-for-its-own-good animation.

I really don't understand why it had to come across that way though, especially after The Jungle Book remake had already proven you could populate a movie with photo-realistic animals and still have them convey the full gamut of human emotions. Perhaps it was because that movie was anchored by an actual live-action performance (namely Neel Sethi as Mowgli), or maybe the animators simply had more time to put in details like subtle ear twitches or furrowed brows, which really goes a long way to make the performances that much more expressive. Or maybe lions are simply not as expressive as wolves, tigers and bears. Who knows at this point.

In terms of the actual vocal performances, the new cast does an admirable job while putting their own spin on the beloved characters. This includes Donald Glover as Simba, Chiwetel Ejiofor as Scar, and to a lesser extent, Beyonce as Nala. James Earl Jones also returns as Mufasa, even though one has to wonder why they simply did not pull his recordings from the previous version, since he was effectively reading the same lines. The obvious standouts here are Billy Eichner as Timon and Seth Rogen as Pumba, whose comedy dynamic help elevate the movie during its latter half. Their rendition of Hakuna Matata in particular is guaranteed to put a smile on your face.

The 2019 version of The Lion King should serve as an example for why newer does not necessarily equate to better. But the fact that it can't hold a candle to the 1994 version does not take away from the mammoth achievement the filmmakers have made in bringing the movie to life. It is impossible to improve on what is already effectively perfect in any case. But as a modern refresh, the movie falls way short of its full potential. That said, it is still effectively the same story we all fell in love with back in the day. And sometimes, a faithful retelling is the best we can hope for.
Posted by Michael Abayomi at 06:42 2 comments: 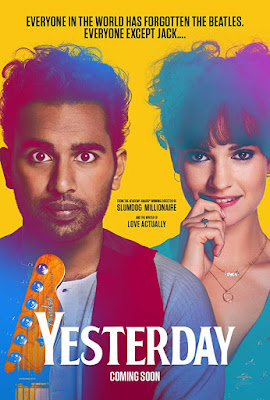 It should come as no surprise that I think The Beatles are one of the greatest rock bands of all time. I mean, no other band has left the world with such a huge collection of great songs, ranging from the instantly catchy (I Feel Fine, I Want to Hold Your Hand) to masterpieces layered with meaning (Hey Jude, The Long and Winding Road). So when I'd heard that Danny Boyle (Slumdog Millionaire, Love Actually) would be making a film that would serve as a tribute of sorts to those songs, I was instantly sold.

The premise of the movie is simple and interesting enough: following an accident that takes place amidst a global blackout, a struggling musician named Jack (Himesh Patel) wakes up to find that he is the only man left in the world with any memory of The Beatles and their music. He eventually decides to capitalize on this strange development by passing off some of their music as compositions of his own.

The film proceeds to chart his meteoric rise to superstardom, a rise that forces him to leave his current manager/love interest, Ellie (Lily James), in favor of Debra Hammer (Kate McKinnon), a cold, calculating woman who manages the likes of Ed Sheeran and sees her clients as nothing more than products to be packaged and sold to the masses. He is joined by childhood friend and roadie, Rocky (Joel Fry). But as Jack would soon find out, there are some things in life more important than money and fame.

Yesterday is a fun romantic comedy with enough reverence for the music of The Beatles to satisfy most of their fans. But anyone expecting anything deeper than that might come out of it feeling sorely disappointed. My main gripe with the movie is the fact that it doesn't even try to explain the reason behind its (almost) sci-fi premise. But I was too busy tapping my feet and singing along to the music on display to care too much about that, which I guess was the point of the whole endeavor.
Posted by Michael Abayomi at 05:52 3 comments: 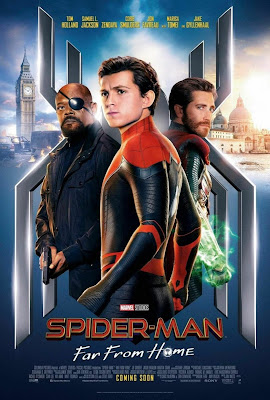 Phase 3 of the Marvel Cinematic Universe (MCU) comes to an end with Spider-Man: Far From Home, and what a wild ride it has been. It has proven to be the longest of all the phases thus far, with eleven films in total, but also the one with the most consistently great output of films. We were first introduced to the MCU's version of the webslinger in Captain America: Civil War at the start of the phase, where he stole the show with his fanboyish naivety and overall charm, so it sort of makes sense that he would close out the entire chapter in this film.

Serving as both a sequel to Spider-Man: Homecoming and follow-up to the amazing Avengers: Endgame, the movie finds the self-proclaimed "friendly, neighborhood Spider-Man" (Tom Holland) stepping outside his comfort zone and embracing his newly-appointed role as one of Earth's mightiest heroes. It's been eight months since the Avengers defeated Thanos, undoing much of the mad titan's work from five years prior. But it was a victory that came at a great cost, and Spider-Man: Far From Home wastes no time in addressing the effects of that loss.

I am of course referring to the death of Tony Stark, who you'd remember was both a mentor and father figure to Peter Parker in the preceding films, albeit a reluctant one. It was both touching and funny to see how the kids from Peter's high school are coping with the loss and its aftermath, as they struggle to deal with the sudden reappearance of half of the world's population, an event that they have since dubbed the Blip.

Peter is hit the hardest by all of this though, who aside from mourning Tony's death must also contend with his growing affections for MJ (Zendaya). He eventually decides to tell her how he feels about her during a two-week European field trip with the rest of his class, and the help of best friend, Ned (Jacob Batalon), except things don't go according to plan when the Italian city of Venice, which they had been visiting at the time, is attacked by a giant water-based monster.

The attack is eventually quelled by a figure dubbed Mysterio, who is actually a man named Quentin Beck (Jake Gyllehaal) working with Nick Fury (Samuel L. Jackson) to stop a global threat. Both men try to recruit Peter in their fight against the Elementals, but Peter is conflicted between stepping into the giant shoes left behind by Tony Stark and just being the regular teenage boy he desperately wants to be.

If Avengers: Endgame was a celebration of all the awesome movies we've had so far in the MCU, then Spider-Man: Far From Home is our first glimpse at its shining future. The movie further traces Peter's journey towards becoming the Spider-Man fans all know and love, which is bolstered by tremendous performances from its talented ensemble, with Tom Holland and Jake Gyllehaal being the immediate standouts. The story also had enough twists and turns to keep casual moviegoers on their toes, even though veteran comicbook fans would've seen most of those twists coming a mile ahead.

The greatest compliment I can pay the movie though is the fact that it works as a teen/romantic comedy as much as it does a full-fledged superhero film, and I found myself laughing more times than I could control during its runtime. It is also one of the MCU's most technically accomplished offerings till date; I caught the movie in 3D/4DX, so the visuals and experience were that much more impressive and immersive. We really felt like we were up there with Spider-Man, swinging through buildings and generally trying not to take too much of a beating.

As a huge Spider-Man fan, I am still trying to decide if Far From Home is better than Homecoming, or even my all-time favorite, Sam Raimi's Spider-Man 2. I don't quite have a definitive answer to that yet. There were definitely aspects in this movie that were better handled, and aspects in the last one that I absolutely adored. Perhaps a second viewing would lend more clarity to the debate, but for now, the movie is definitely up there with the aforementioned films.
Posted by Michael Abayomi at 08:52 44 comments: