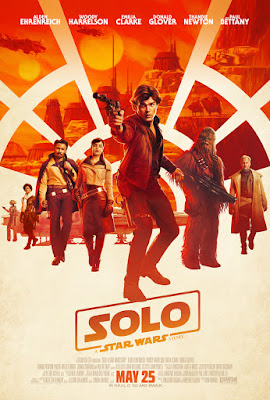 The second Star Wars anthology movie is here, arriving just five months after the release of The Last Jedi. There's been much talk over the internet about franchise fatigue, so I'd be quick to confess that like many fans, I was also skeptical about the prospects of a young Han Solo movie. I mean, here was a character we all grew to love over the course of the original trilogy, played so perfectly by Harrison Ford. And our skepticism wasn't exactly helped by news of the film's troubled production, with original directors Phil Lord and Christopher Miller being fired midway due to creative differences, prompting reshoots and a change of director.

They were replaced by Ron Howard, and he has done an admirable job of making the whole thing look like a coherent whole, unlike the last movie I saw with an equally troubled production. So the burning question then is how does all of this affect the quality of the final product? And the answer I guess depends on how you've felt about the recent crop of Star Wars movies, and more importantly, what you are expecting from this one. Billed as a space western, the movie makes good on its promise of depicting a fun adventure by a beloved character, but doesn't aspire to do much else.

The movie is set about 10 years before the events of A New Hope, at a time before Han Solo (now played by Alden Ehrenreich) became the hotshot pilot of the Millenium Falcon. Tired of life in the slums of his home planet Corellia, young Solo plots his escape with love interest, Qi'ra (Emilia Clarke). But the two are separated when she is captured at a security checkpoint during their escape. Han vows to come back for her, and he spends the next three years trying to raise enough money to buy a ship and do just that, first by enlisting in the Imperial Navy, before joining a group of criminals. Led by a man known as Tobias Beckett (Woody Harrelson), the group inform Han of a train heist that would reward him with enough money to carry out his vow.

Things don't go according to plan though and they are ambushed by a rival gang in the middle of the heist, ultimately losing the shipment of coaxium (a precious hyperfuel) they'd been after. Han learns that the job was actually done in service of the crime boss, Dryden Vos (Paul Bettany), and their failure means they'll need to find another way to repay him. They manage to avoid certain death at his hands by convincing him they'd secure enough raw coaxium to repay him, but to do so, they'd need a ship fast enough to make the infamous Kessel run. And so they go in search of the one man with a ship that meets that requirement, the smuggler Lando Carlrissian (Donald Glover).

If I were to rank the recent Disney-produced Star Wars movies, Solo: A Star Wars Story would fall squarely into the last position. That said, the film is by no means a bad movie. Far from it. It has its fair share of flaws, for sure. It takes some time for things to really kick into gear, and it also fails to show any meaningful character development for its key characters, Han Solo most especially. There is also that overall lack of suspense, since we already know where the whole thing is headed. There were also some unresolved subplots and twists towards the end that allude to some sort of sequel or connection to a future anthology movie.

You can blame all this on the exceptionally high bars set by Rogue One and The Force Awakens. Or as the naysayers on the internet would put it, on franchise fatigue. But ultimately, the movie functions more like a fun excursion to a place we've all come to know all too well; beautiful for sure, but doesn't leave much of a lasting impression.
Posted by Michael Abayomi at 06:31 7 comments: 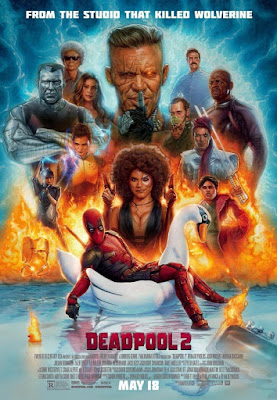 The Merc with a Mouth returns for another round of antihero mayhem in Deadpool 2. Helmed by David Leitch of John Wick and Atomic Blonde fame, the movie promises more of the over-the-top action and fourth-wall-breaking comedy that made the original such a hit. But does it deliver? Well, the answer depends on whether or not you subscribe to its brand of self-deprecating humor and extreme violence. In other words, there's plenty for fans to love, but not much else for anyone else.

The movie opens with Wade Wilson a.k.a. Deadpool (Ryan Reynolds) embracing his newfound status as a bonafide superhero. But his world is torn apart when he suffers a loss that sets him on a suicidal path made hopeless by his regenerative abilities. He is soon recruited by a sympathetic Colossus (Stefan Kapičić) to become an X-men trainee, and it is there that he discovers a new sense of purpose, after meeting Russell Collins (Julian Dennison) on their first mission, a young mutant boy also struggling to find his place in the world.

Unbeknowst to them, the young boy would eventually grow up to become a supervillain responsible for countless deaths. To prevent this, as well as the death of his family, a cybernetically-enhanced soldier from the future called Cable (Josh Brolin) travels back in time on a mission to kill the boy.  But Wade is determined to save the boy, and this he tries to do by assembling a team of would-be superheroes that would form the seeds for what would eventually become the X-Force.

Deadpool 2 is the sequel that fans of the original hoped and asked for. It is funnier and bloodier than everything else out there at the moment, and because it operates on a much smaller scale than the likes of recent superhero team ups Justice League and Avengers: Infinity War, it feels refreshingly personal. Ryan Reynolds (who also co-wrote much of the script) brings the character to life once again with another breakout performance, proving again why he is such a perfect fit for the role.

Deadpool 2 delivers the laughs and thrills while setting up more films in the franchise, with enough surprises to keep fans of the original (and of the X-men universe at large) happy and eager for more. And yes, you'll definitely want to stick around for the post-credits scenes, which were easily some of the best I've seen in any superhero movie.
Posted by Michael Abayomi at 06:13 5 comments: