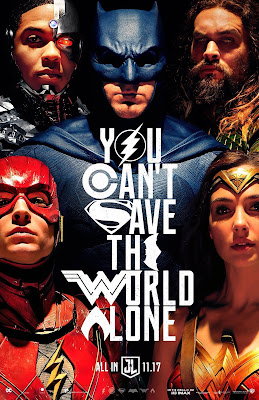 The most eagerly anticipated entry in the DC Extended Universe (DCEU) is finally here. And after four movies (and not nearly enough backstory between them), comic book fans and moviegoers in general get to witness the superhero team up meant to rival Marvel's The Avengers. So how does it measure up to Marvel's beloved franchise? Read on to find out as I try to answer just that in my non-spoilerific take on the movie.

Justice League is set about a year after the events of Batman v Superman. Superman has been gone for all that time, while Batman has been busy trying to assemble a team of metahumans to staved off the threat he foresaw in a vision from the previous movie. And just like clockwork, it isn't long into the movie before that threat manifests in the form of Steppenwolf and his army of Parademons. Their mission, it seems, is to bring forth some sort of apocalypse, which involves the joining together of three ancient artefacts known as Mother Boxes. Sounds familiar?

The movie does what it can to introduce the members of the Justice League within its two hour runtime, but once again, the franchise's greatest shortcoming is not allowing for enough room to explore the arcs and backstories of these individual characters, Flash, Cyborg and Aquaman most especially. There is also that palpable sense that the directors (Zack Snyder and Joss Whedon) had made a concentrated effort to lighten the tone of the film, making the shift jarring in places, but it works for the most part.

I have to admit that I went into Justice League with lowered expectations, after the huge disappointment I suffered after Batman v Superman and Suicide Squad. And all through its overdone, cartoony CGI, and hard-to-follow action sequences, I kept asking myself one question: was it any good? The answer to that question is a reassuring yes. I mean, this is the moment every DC fanboy has been waiting for. And while the film isn't without its fair share of flaws, it is still a general step in the right direction and a hopeful indicator of things to come.
Posted by Michael Abayomi at 06:24