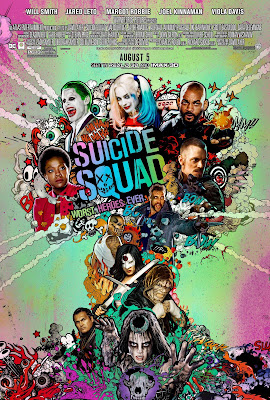 After the relatively lukewarm receptions gotten by both Man of Steel and Batman v Superman, expectations were indeed quite high for the DC Extended Universe's third entry, Suicide Squad. And just like the aforementioned films, the movie is already proving to be just as divisive among critics and audiences alike.

In the wake of the growing threat of metahumans, a high-ranking government official named Amanda Waller (Viola Davis) is given the go-ahead to assemble a task force of criminals with special abilities. Known as the Suicide Squad/Task Force X, the team is made up of Deadshot (Will Smith), Harley Quinn (Margot Robbie), Captain Boomerang (Jai Courtney), El Diablo (Jay Hernandez), Enchantress (Cara Delevinge) and Killer Croc (Adewale Akinnuoye-Agbaje).

It doesn't take long into the movie before one of the squad members goes rogue, and in their first field mission, the other members are tasked with securing a high-profile target from the site of the rogue member's base of operations. They are joined by their field leader, Rick Flag (Joel Kinnaman), as well as his bodyguard, Katana (Karen Fukuhara). Added into the mix is the Joker (Jared Leto), the crown prince of crime who is willing to go to any lengths to rescue a target of his own, his love interest, Harley Quinn.

Primed as being DC's offbeat take on the superhero genre, Suicide Squad was expected to infuse some much-needed humor and color into a universe many considered too dark and brooding. And on those very grounds, it succeeds. But all the color and humor in the world couldn't possibly mask a plot that was generic and derivative, or a pair of villains that simply fail to leave an impression.

On the plus side, the movie boasts strong performances by the likes of Viola Davis and Margot Robbie, as well as some killer tunes on its soundtrack. But overall, what we have here is all style and very little substance.
Posted by Michael Abayomi at 08:35