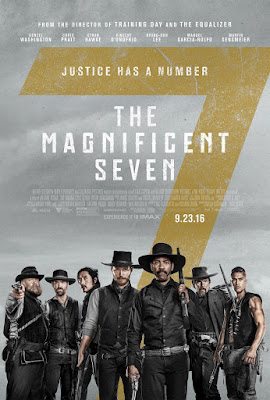 As a seasoned moviegoer, I am no stranger to Hollywood's much-reviled fixation with remakes. And the only thing worse than one of these remakes it seems is the remake of a remake. Thankfully, The Magnificent Seven manages to circumvent that black hole of dreariness by leaning heavily on the performances (not to mention overall appeal) of its star-studded cast.

The ensemble is led by Denzel Washington, who plays Sam Chisolm, a bounty hunter sought out to protect a small town that has been recently overrun by a group of outlaws. To do so, he must first enlist the help of fellow gunslingers Josh Faraday (Chris Pratt), Goodnight Robicheaux (Ethan Hawke), Billy Rocks (Byung-hun Lee), Jack Horne (Vincent D'Onofrio), Vasquez (Manuel Garcia-Rulfo) and Red Harvest (Martin Sensmeier). Thus, the titular seven is born, and in their wake they leave behind the kind of body count you’d expect from an action film directed by Antoine Fuqua (King Arthur, Olympus Has Fallen).

The Magnificent Seven is a by-the-numbers western that felt closer to the video game, Red Dead Redemption, than any one of Quentin Tarantino’s modern classics (Django Unchained, The Hateful Eight). But what it lacks in detail and well-written dialogues, it makes up for with fun and spectacle. The result is a movie that plays like a summer blockbuster. Just don’t expect to be blown away.
Posted by Michael Abayomi at 08:53