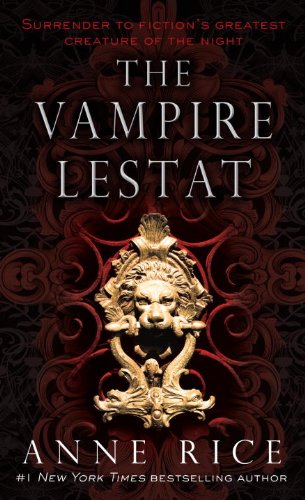 The Vampire Lestat is the second book in The Vampire Chronicles. It was published in 1985, and formed part of the basis for the 2002 movie, Queen of the Damned. It is the first book in the series to be told exclusively from Lestat's perspective, after Louis' less-than-favorable portrayal of the character in Interview with the Vampire.

Following the events of the previous book, Lestat spends more than half a century in hibernation. But he is awakened by the sights and sounds of the 1980s, in particular, the music of a band called Satan's Night Out. He joins the band as lead singer, renaming it to The Vampire Lestat, and he uses it as a vehicle to achieve both fame and grandeur. He then proceeds to narrate how he'd become a vampire.

Lestat was born in 18th century France, to an aristocratic family that had fallen on hard times. Growing up in the countryside in his father's dilapidated estate, Lestat had always harbored dreams of fame. One day, he escapes to Paris with his friend, Nicki, in a bid to realize those dreams. But he was to meet with fate instead, and he is transformed into a vampire by another named Magnus, who then abandons him after the act.

Lestat inherits Magnus' estate, and relishes his newfound powers, but his joy is short lived when he is payed a visit by his mother, who had fallen gravely ill. Unable to bear losing her, Lestat transforms her into a vampire as well, expecting that they'd spend the rest of eternity together. But like most vampires, she quickly loses interest in him following the transformation, and she seeks adventure elsewhere.

Lestat then meets another vampire named Armand, from whom he learns about his maker, Marius, one of the oldest known vampires. He immediately becomes obsessed with finding Marius, and he journeys around the world, leaving a trail that would hopefully lead Marius to him.

The Vampire Lestat is considered the best book in the series by many. It covered a lot more ground than book one, and also showed us a different side of the titular character. Lestat is one of my favorite antiheroes, known for his arrogance and lust for power. And while I can see why The Vampire Lestat could be considered the best in the series, I'd still reserve that honor for Interview with the Vampire, simply because it was where we were first introduced to Anne Rice's take on the vampire myth.
Posted by Michael Abayomi at 08:00