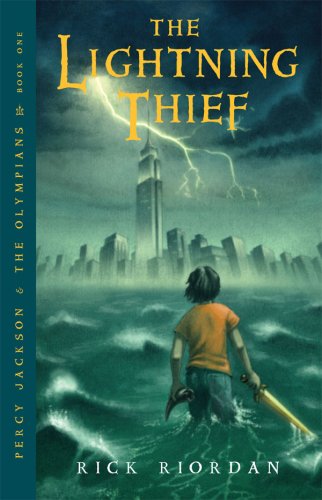 Percy Jackson & the Olympians is a fantasy series by Rick Riordan. The books are based on stories from Greek mythology, and are well noted for reimagining events and characters from these stories, placing them in a present-day setting. Each book tracks the development of the eponymous main character, Perseus, who becomes the subject of a prophecy that would determine the fate of the titular Olympians.

Percy Jackson is a teenage boy suffering from dyslexia and ADHD. He is also the son of Poseidon, god of the sea. And he is not alone. All through human history, the Greek gods have had affairs with mortals. The children of such unions are the heroes of legend known as demigods, who aid the gods by embarking on quests on their behalf. Except not all demigods were inherently good.

Following the events of the Second World War, which according to the books was started by disagreements between demigods, the gods of Olympus came to an all-important decision. The three most powerful gods - Zeus, Poseidon and Hades - were made to promise not to father more children with mortal women, since such children tended to be the most unstable of all the demigods.

But of course, the promise is eventually broken, and Percy is born. And like all other demigods, he somehow ends up attracting all sorts of monsters from myth and legend, all of them seeking to destroy him before he is strong enough to hunt them down. In order to learn how to defend himself, he attends Camp Half-Blood, a summer camp where demigods are trained in preparation for a life in service of the gods.

The Percy Jackson books are fast-paced adventures where the characters are constantly faced with challenges. They are also quite comical, which gives the series most of its appeal. The first book in the series, The Lightning Thief, was adapted into a 2010 blockbuster movie, while The Sea of Monsters (#2 in the series) is presently slated for a late summer release. I was one of those who found the first movie considerably disappointing, so hopefully they'll be able to get things right this time around.
Posted by Michael Abayomi at 08:00