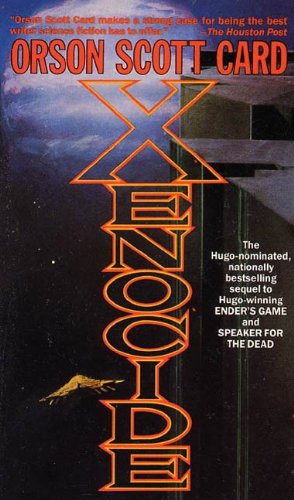 Xenocide is a science-fiction novel by Orson Scott Card. It is the third book in his Ender's Game series, and was published in 1991. The first two books in the series, Ender's Game and Speakers of the Dead, are renowned for winning both the Hugo and Nebula awards, and I am indeed ashamed to admit I am yet to read any of them. But I was pretty strapped for a speculative fiction book worthy enough to highlight for letter X in the ongoing A-Z Challenge. The following synopsis has been lifted straight from the book's Amazon page:

The war for survival of the planet Lusitania will be fought in the hearts of a child named Gloriously Bright.

On Lusitania, Ender found a world where humans and pequininos and the Hive Queen could all live together; where three very different intelligent species could find common ground at last. Or so he thought.

Lusitania also harbors the descolada, a virus that kills all humans it infects, but which the pequininos require in order to become adults. The Startways Congress so fears the effects of the descolada, should it escape from Lusitania, that they have ordered the destruction of the entire planet, and all who live there. The Fleet is on its way, a second xenocide seems inevitble.

Now then. This is the part where I am suppose to weigh in with my thoughts, or say something witty about the book. But since the book in question is still buried deep in my TBR pile, I'll leave the weighing in to those familiar with the story. Anyone?
Posted by Michael Abayomi at 08:00