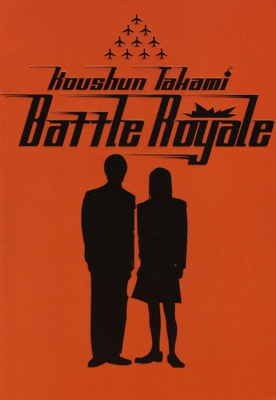 Before The Hunger Games, there was this other book called... okay, okay. I'm sure most of you must have heard this fact restated at least a thousand times by now. So I'll try my best not to let it overshadow the rest of today's post.

In Koushun Takami's Battle Royale, a group of junior high school students are kidnapped during an excursion. They awaken following a gas-induced sleep to find themselves on a remote island, where they learn they must battle one another in true gladiator style, until there is only one boy or girl left standing. It is all part of a government-funded program called (you guessed it) the Program, which was designed to instill fear into the minds of the general public, and by so doing prevent all thoughts of rebellion.

Ahem. I know I said I wasn't going to make any more references to The Hunger Games. But jeez louise, could the basic concept behind both books be any more alike if it tried? I mean, just reading the above synopsis over again and I find myself trying to remember which of the two books I am talking about here. But while both books share the same general idea, it is in the execution of that idea that each finds its respective audience.

The general word on the street is that The Hunger Games is a watered down version of Battle Royale, much the same way that Twilight is regarded when compared to Anne Rice's vampire books. Also, unlike Hunger Games, which was clearly set in a post-apocalyptic version of America known as Panam, Battle Royale takes place in an alternative reality, wherein Japan is part of "an authoritarian state known as the Republic of Greater East Asia."

Following its publication in 1999, it didn't take long before Battle Royale was adapted into a movie of the same name (2000). Since then, both the book and movie have managed to find a somewhat cult following, despite being heavily criticized for its subject matter and depiction of violence.
Posted by Michael Abayomi at 09:00