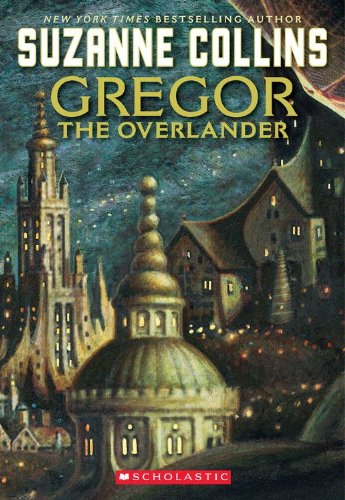 The Underland Chronicles is a young adult fantasy series by Suzanne Collins. The five books in the series were published between 2003 and 2007. They follow the adventures of an eleven-year-old boy named Gregor, and his two-year-old sister, Boots, who discover a place called the Underland after falling through a hole behind their washing machine.

The Underland lies directly underneath New York City. It was first settled by humans some 600 years prior to the time of the stories. These people, led by a man known as Bartholomew of Sandwich, built the stone city of Regalia as their new home. Over the years, they become paler due to their lack of exposure to sunlight. And the overlanders (that's us) live completely oblivious to their existence.

The Underland is also home to a number of other races. These include giant versions of what we call rats, bats, cockroaches, spiders, mice and ants, each with its own  settlement. Most of them live in isolation from one another, but there are few who are allied, like the humans and bats for instance, and others still who are at war with one another. Much of the conflict in the books centers on the war between humans and rats.

Throughout the series, Gregor and Boots become subject to the prophecies of Sandwich, who had foreseen their coming to the Underland, and had written those prophecies to guide their adventures. And so in each book, the siblings end up embarking on a quest that causes them to journey through the Underland. There are always several twists and turns along the way, and only by the fulfillment of these quests do they learn the true meaning of the prophecies involved.

Suzanne Collins is better known for her other young adult series, The Hunger Games, largely due to the ongoing series of movies based on those books. But The Underland Chronicles is every bit as praiseworthy, even though it is clearly geared towards a slightly younger audience. It has a better cast of characters, like the ill-mannered rat, Ripred, and the mean-spirited princess, Luxa. But the most interesting character in the bunch is Gregor, who aside from looking after his little sister, also has to embrace his role as savior of the Underland.
Posted by Michael Abayomi at 11:43