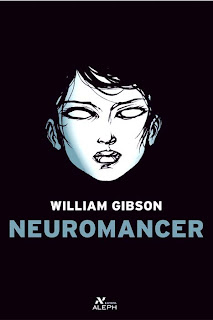 Cyberpunk is without a doubt my favorite science-fiction subgenre. It deals with near-futures where technology, typically owned by megacorporations (as opposed to governments), is used in unintended ways to augment everyday life. One of the biggest names associated with the genre is William Gibson, author of the Sprawl trilogy. His 1984 book, Neuromancer, helped shape the genre into what it is today.

In Neuromancer, a washed-out computer hacker named Henry Case is given a chance to get back into his trade. Having been caught stealing corporate data from his employer, Case was injected with a mycotoxin, damaging his central nervous system and leaving him incapable of jacking into "the Matrix," a virtual reality representation of cyberspace. He is approached by Molly, a mercenary working for an ex-military officer named Armitage, offering to repair said damage on the condition that Case helps them break into a highly-protected computer network.

Case accepts the offer, undergoing the operation needed to fix his central nervous system. But in order to ensure that he kept his end of the bargain, Armitage informs Case that sacs of the mycotoxin have also been implanted into his blood vessels, and they've been built to dissolve gradually. This would give Case just enough time to complete the job and secure a remedy, before he is crippled by the mycotoxin all over again. As they prepare and recruit the aid of other specialists, Case and Molly also begin investigating Armitage. The trail would eventually lead them to his employer, Wintermute, an artificial intelligence seeking to connect with its other half, the eponymous Neuromancer.

Neuromancer is recognized as the first novel to win the science-fiction triple crown, namely, the Hugo Award, the Nebula Award, and the Philip K. Dick Award. It took me a while to really get into it, but once I became familiar with William Gibson's writing style, all the elements fell into place and the story quickly transformed into the page-turner it was intended to be.
Posted by Michael Abayomi at 10:54