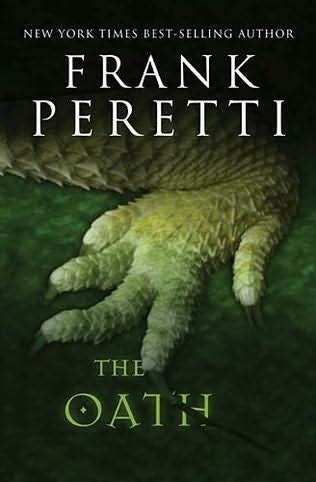 Frank Peretti is a bestselling writer of supernatural thrillers with Christian themes. He has been called "a sanctified Stephen King" and his books have sold more than 15 million copies collectively. His debut novel, This Present Darkness, dealt with spiritual warfare between angels and demons, and the role our prayers have to play in such warfare. In The Oath, he tackles the subject of sin and its many ramifications.

Following the death of a nature photographer named Cliff Benson, his brother, Steve, journeys to the mining town of Hyde River to ID the body they'd found in the woods, which was missing a head and an arm. Cliff, who had been out camping with his wife, Evelyn, is believed to have been killed by a rogue bear. But Steve finds that hard to accept, being an expert in such attacks. He launches further investigations into the matter, and he is aided by a woman named Tracy Ellis, the Sheriff's Deputy.

It doesn't take long before their investigation ruffles a few feathers in the sleepy little town, with most of the townsfolk being reluctant to help them out. According to Tracy, they were all sworn to an oath of secrecy that was included in the town charter when it was founded many years ago, which prevented them from sharing what they knew with anyone from outside their town. The only person willing to help them is a man named Levi Cobb, a mechanic resented by the townsfolk for his morals.

While the investigation is going on, a series of deaths and disappearances also sweep through the town. Tracy informs Steve that the townspeople believe it is being caused by a giant dragon, a belief they have passed down from generation to generation, used to explain any and every strange occurrence in their town. Except Levi doesn't regard the dragon as mere myth. And when the townspeople learn he has broken the oath by sharing part of their secret, they are willing to go to any lengths to contain the leak.

The first thing I love about The Oath is its unique blend of fantasy and horror. Then there is the story itself, which I feel would lend itself perfectly to a special-effects-laden blockbuster movie, if only Hollywood was inclined to adapt such stories. I also love the fact that its Christians themes, while clearly present, were presented with just the right amount of subtlety. In other words, the book didn't feel preachy at all, which I think is what defines a great Christian fiction book.
Posted by Michael Abayomi at 08:00