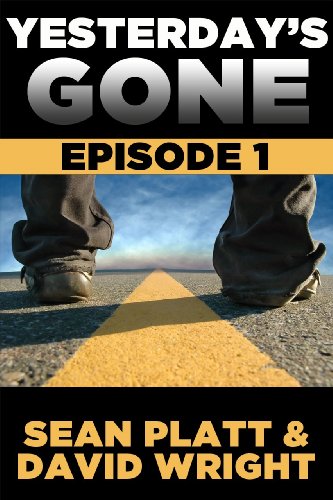 Yesterday's Gone is one of several ongoing serials by writing duo, Sean Platt and David Wright. It is a post-apocalyptic thriller started in 2011. It was modeled after popular TV series like Lost and 24. Each "episode" is typically around 20,000 words in length, and at the end of a six-episode season, all the episodes therein are repackaged as a novel-length omnibus. The premise of the series is simple: on the 15th of October, at precisely 2:15 a.m., a vast majority of the people on Earth vanish.

The story follows an ensemble cast of characters, who awaken the morning after the night in question to find their various towns and cities completely deserted. These include a journalist who is haunted by the fact that he didn't find enough time for his family when it mattered, and a serial killer who makes a transition to antihero when it becomes apparent that his usual prey has been replaced by something much more sinister. And much of the fun is in watching how these characters inevitably cross paths with one another.

The first book that came to mind after seeing Yesterday's Gone for the first time was Left Behind. And indeed, the similarities between the two cannot be ignored, even though those similarities end with their shared premise. In the latter, it is a much smaller group of people (the true believers) who vanish overnight, and they presumably vanish to a better place. Here, it is the vast majority who disappear, and from what I can tell you from the little I have read (season one), they didn't exactly vanish to a better place.

Yesterday's Gone works because its writers have managed to find a way to keep the ball rolling. From the very beginning, the reader is left with one of several questions. Where did everybody go? Why have some been left behind? What role does the government have to play in all this? How are the characters ever going to survive such overwhelming odds? And just when it seems things are finally adding up, a new twist is introduced that blows all previous theories out of the water.
Posted by Michael Abayomi at 08:00