Khaled: A Tale of Arabia 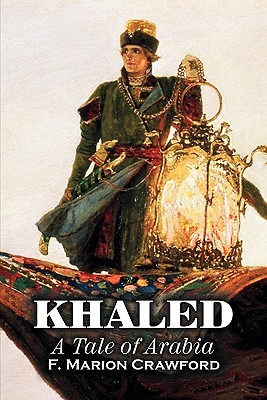 Khaled: A Tale of Arabia is a fantasy novel by F. Marion Crawford. Originally published in 1891, it tells the story of a genie (the kind from Islamic folklore, not the pop culture variant that grants three wishes) that is made human as punishment for killing another man, an Indian prince who had been meaning to secure the hand of a beautiful princess named Zehowah through lies and false promises.

By very design, genies do not possess a soul, and are therefore condemned unless they can show by their actions that they believe in God. As part of his punishment, Khaled is promised a soul at the end of it on one condition: that he is able to make the princess, whose suitor he had slain, fall in love with him instead. But unknown to him, the princess in question is a very strong-willed woman who doesn't believe in love.

So Khaled is made human, and through divine intervention (and some logical reasoning on the part of the bride to be) he is able to win Zehowah's hand in marriage, the only child of the sultan, meaning he would become ruler of the desert kingdom of Riad upon the sultan's passing. The day after the wedding ceremony, he is immediately forced to prove his worth as future ruler against an enemy invasion.

Khaled leads the armies of Riad, and shows enough bravery and swordsmanship to rally them against the enemy. They drive the invaders out of their city, and continue to hunt them down as they attempt to flee across the desert. Upon his return, he tells Zehowah of all his exploits, hoping to finally win her love. But the princess, though impressed by all of it, still doesn't believe that love is a required component of their relationship. And so begins his quest to find a way to win a place in her heart.

Khaled was one of several books I read specifically for the A-Z Challenge, because lets face it, I haven't read that many speculative fiction books, not to mention those beginning with the letter K. But I'm sure glad I read this one, because Mr. Crawford's depiction of Arabia, its people, their ways and their customs is nothing short of beautiful. His descriptions tend to be long-winded though, a complaint that can be held against just about every classic fantasy story ever written.
Posted by Michael Abayomi at 08:00