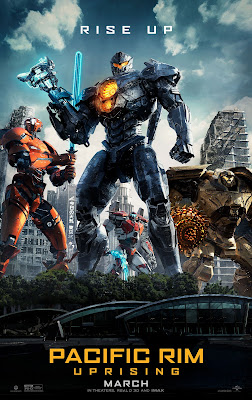 One of my favorite movies from 2013 gets a much-anticipated sequel in the form of Pacific Rim: Uprising. It's taken half a decade, due partly to the first movie's lukewarm reception at the North American box office. Thankfully, it made enough bank in China to guarantee a sequel was greenlit, but not before the project lost its director, Guillermo del Toro (who had to step down to direct the Academy Award winning The Shape of Water instead, but still serves as Producer). He was replaced by Steven S. DeKnight, and marks the Daredevil showrunner's feature-film directorial debut.

Set 10 years after the events of the first movie, Pacific Rim: Uprising explores the aftermath of mankind's survival in a future where they were almost wiped out by giant monsters known as Kaiju. In that future, war with these monsters was waged through Jaegers, giant robots that are so large that they require two pilots to operate. We are introduced to a fresh batch of Jaegar cadets, who are led by Jake Pentecost (John Boyega), son of Stacker Pentecost (Idris Elba), who you remember sacrificed himself to close "the breach" from the first movie's climatic battle.

He is helped by Nate Lambert (Scott Eastwood), a rival ranger and former co-pilot. They are joined by Mako Mori (Rinko Kikuchi) and doctors Newton Gieszler (Charlie Day) and Hermann Gottlieb (Burn Gorman), who reprise their roles from the first film (though oddly enough there is no mention of Raleigh Beckett, that movie's hero, or any explanation given for his absence). The group must work together to ensure mankind's continued survival, even as the Jaeger program faces the danger of becoming obsolete in the face of a drone program championed by the villainous Liwen Shao (Jing Tian).

We've all seen giant robots beating the shit out of each other before, no doubt. But nowhere else was it as fun or exhilarating to watch as it was in Pacific Rim. The sequel does its best to ramp up on the action, as should be expected, but a change in directors also meant a change in overall tone, shedding much of the first film's dark imagery in favor of brightly lit cityscapes and colorful robots. This comes at the expense of the sense of majesty and splendor we got during the fights in the first movie.

Also, the film lacks much of the first movie's heart and otherworldliness, replacing that with a campiness that wouldn't feel out of place in your typical leave-your-brain-at-the-door blockbuster. But even at its loudest and very dumbest, the film still towers above all the recent Transformers films, which says more about the quality (or lack thereof) of the movies in that franchise than anything else.
Posted by Michael Abayomi at 06:21 7 comments: