There's nothing like the smell of zombie love in the morning. And as repulsive as that might sound, that's the concept behind this zombie romance movie adaptation. It's a concept that was briefly explored in the 2008 remake of Day of the Dead (quite possibly the worst zombie movie of all time). But what keeps it fresh here is the performance of British actor Nicholas Hoult as the lovestruck zombie, R.

Who says you can't do an intelligent movie about giant robots beating the sh*t out of giant monsters? Definitely not Guillermo Del Toro. The director behind Pan's Labyrinth (one of the most visually stunning movies in existence) adds another visual masterpiece to his résumé. Pacific Rim not only puts the Transformers movies to shame, it also raises the bar for all subsequent Kaiju (that's Japanese for giant monster) movies to come, like the upcoming remake of Godzilla due next year.

Zack Synder's reboot of the Superman franchise failed to strike a chord with most critics this year. But what it lacks in thought provocation, it more than makes up for in raw, visceral, superhero action. Put simply, Man of Steel packs more action (and of course punches) than last year's The Avengers, even though it lacks that movie's overall charm and appeal. Still, we need to consider that this is just the beginning of something bigger. So as far as beginnings go, I'd love to see what comes next.

As a kid, I spent unhealthy amounts of time gazing up at the stars, fantasizing about becoming an astronaut someday. I wonder if I would have felt the same way if I had seen Gravity back then. The first facet of this movie that struck my fancy (after I'd learnt it was in the works) was its two cast members. George Clooney and Sandra Bullock play two astronauts trying to survive the aftermath of a mission gone wrong. And while I wouldn't want to trade places with either of them, watching their struggle for survival is an experience I don't mind going through over and over again.

Rounding out my list of favorites this year is yet another zombie movie adaptation. But unlike Warm Bodies, which felt a bit dumbed down in order for it to appeal to its primarily teenage audience, World War Z didn't feel dumbed down at all. It was also one of the biggest blockbuster movies this past year, a fact that pretty much ensures we'll be getting a sequel sometime in the near future. 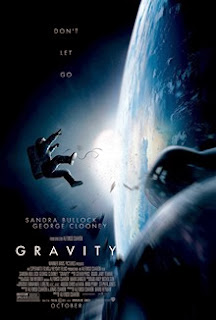 Alfonso Cuarón has done it again. He has left us with another science fiction masterpiece. Gravity would go down in history as one of the genres finest. Everything from the visuals, to the score, to the acting, to the cinematography, oozes with perfection. No other movie, over this past year, has triumphed on so many fronts. And with the awards season already underway, it would be interesting to see just how many nominations and awards Gravity would rack up.
Posted by Michael Abayomi at 10:01