My week-long "2013 in Review" series of posts ends today, with a look back at the year. But first, a quick rundown for those just joining in. On Monday, I revealed my favorite books for the year. On Tuesday, it was favorite songs. On Wednesday, favorite albums. And yesterday, I short listed my favorite movies. Today, I'll be touching upon just a few of the things that shaped 2013.

2013 marked the arrival of a new generation of video game consoles, even though the first entrant into this brave new world, the Nintendo Wii-U, was released all the way back in November, 2012. I don't own any of these consoles, yet, but I see myself getting a PS4 sometime in the not-too-distant future. I've all but lost my faith in Microsoft, following their announcement (and eventual reversal) of the Xbox One's DRM and always-on policies. 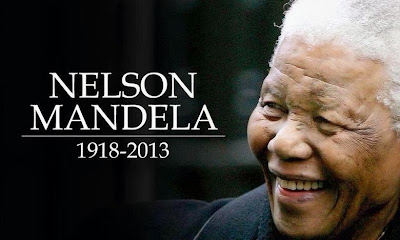 2013 was also the year that the world lost one of its last true legends. Madiba, as he was known back home in South Africa, was a man that stood for many things. He stood for freedom. He stood for equality. But most importantly, he stood for reconciliation. His actions would help bring down the walls of racial segregation brought about by apartheid. He will forever be remembered as a beacon of hope for generations to come.

Much like I did at the start of last year, I started this year with a bunch of writerly goals. To summarize, I planned on writing a new book entitled Proxies. I also planned on having a greater online presence in the various social media channels, amongst other things. Well, as things presently stand, I am yet to finish the book, nor has my online presence grown by any measurable standard. To the contrary, I think it has taken a hit.

So what happened then?

Looking back, at the time I set those goals, I didn't envision that I would be taking a desk job shortly thereafter. Prior to now, I've only ever taken freelance gigs. I did a two-month stint as a IT instructor once, and that was it. So needless to say, I never envisioned just how much time this desk job would be taking away from my writing. Do I regret any of it? No. Not really. It was a logical next step in this road called life. I'll just have to find a way to make things work. More on that next year.

Thanks for visiting, and see you again on the other side.
Posted by Michael Abayomi at 12:11