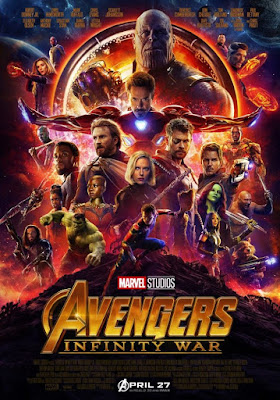 As far as event movies go, I think it's fair to say that there's been none as highly-anticipated as Avengers: Infinity War. Serving as the culmination of 18 movies and 10 years worth of buildup and carefully-plotted foreshadowing, the movie finally finds Earth's mightiest heroes facing off against their most formidable foe to date, Thanos. But is the movie itself worth all the buildup and hype? The answer is a resounding yes, and it delivers on the promise that was made in the post-credits scene of the first Iron Man movie all those years ago.

Infinity War picks off right where Thor: Ragnarok left off, with Thanos confronting Thor, Hulk and what remains of the Asgardians. And right off the bat, the movie shows us just how formidable a foe Thanos is. It is hard to talk about any specific plot points without falling into spoiler territory, even that early into the movie, but to sum things up, Thanos is basically gathering the six Infinity Stones. These are to be used in his ultimate weapon, the Infinity Gauntlet, which would help him become the most powerful being in the universe, capable of ending life with the snap of a finger.

In order to stop Thanos, the Avengers must put aside their differences and band together once again. But this time around, they would require all the help they can get, and they join forces with everyone's favorite ragtag group of heroes, the Guardians of the Galaxy. I was indeed surprised by how much Infinity War felt like a Guardians movie, with all its intergalactic planet hopping and quirky sense of humor. But make no mistake, this movie is about Thanos, and he remains at the center of everything.

Much like they did in Captain America: Civil War, the Russo Brothers prove once again that they know how to juggle multiple heroes and still manage to give each one time to shine, even though there were times that felt like there was simply too much going on at once. This is definitely a movie that would benefit from repeat viewings, a requirement if you're hoping to catch all of its various hints and subplots. The movie's biggest shortcoming though is in its two-part delivery, a format that all but necessitates a cliffhanger ending. And what a heart-wrenching ending it was too.

But negatives aside, what Marvel has been able to achieve over these last 10 years is nothing short of amazing. And Avengers: Infinity War stands as the current pinnacle of that achievement. The movie had actual stakes, with the threat of death and total annihilation hanging over our heroes during its entire runtime. Thanos is also a complex villian, with actual, clear-cut motives, and I found myself rooting for him much in the same way we all rooted for Killmonger in Black Panther.

The movie also delivered the goods in terms of spectacle, with barely enough room between fight scenes to digest it all. Avengers: Infinity War is a movie that would be talked about for weeks, months and years to come, and it is quite possible we may never get to experience this level of anticipation and excitement again (at least until the second part comes out next year), so go out and enjoy it while you can.
Posted by Michael Abayomi at 05:43