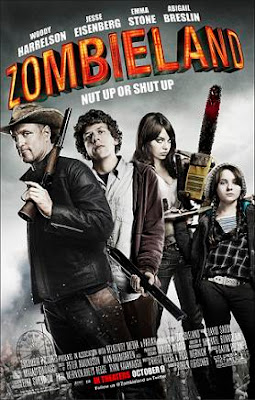 I absolutely love zombie movies. I've seen everything from the good (Dawn of the Dead, 2004), to the bad (Day of the Dead, 2008), to the downright horrific (The Evil Dead, 1981). So you can understand my curiosity and immediate need to experience Zombieland when it opened to high praises and rave reviews in 2009.

In a post-apocalyptic United States plagued by a virus outbreak, a young man (Jesse Eisenberg) journeys east in search of both parents. The main obstacle to his goal, aside from the complete breakdown of society, is the ever-present danger of being eaten alive by the infected. To help him better survive this zombie apocalypse, he comes up with a list of rules. This includes things as trivial as avoiding bathrooms and travelling light. It is this list though, coupled with his reclusive nature, that has kept him alive thus far. But he soon finds out that some rules are made to be broken.

His journey brings him in contact with an interesting cast of characters: Tallahassee (Woody Harrelson), a hard-as-nails zombie killing machine with a soft spot for Twinkies, and the sweet but conniving sisters, Wichita (Emma Stone) and Little Rock (Abigail Breslin). Together, they embark on a road trip to what might be the only safe haven left in the country, an amusement park.

I went into Zombieland fully prepared to hate its guts. This was not only due to the fact that it was infringing on the territory of one of the funniest movies I've ever seen (Shaun of the Dead), but because it had successfully dethroned my favorite zombie movie (Dawn of the Dead, 2004) as the highest grossing zombie movie of all time. I soon realized however that I was just being silly.

Zombieland excels for a number of reasons. It is funny, action-packed and its characters show a surprising level of depth. What it lacks though is true scares. It quickly becomes apparent that while the movie might be graphic and violent, it is closer to an action-comedy than a horror-comedy.

All that said, I thoroughly enjoyed watching Zombieland and would highly recommend it to anyone, like me, with a love of all things undead.
Posted by Michael Abayomi at 09:59