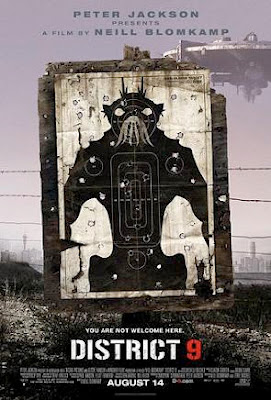 The 2009 science fiction movie that took the world by surprise. Well, at least before Avatar came along and blotted out the sun. The most remarkable thing about District 9 is not its South African origin, or its modest $30 million budget, but its unique spin on the tried-and-tested alien invasion formula.

The story focuses on our first encounter with an alien race. And for the first time in cinema history, these aliens didn't come to show us the error in our ways, or to enslave us, or to mine our resources, or to blow us to smithereens, but to seek asylum as mere refugees. And just as important, they didn't choose to seek said refuge in Washington DC, or London, or Tokyo, but in the South African city of Johannesburg.

Right off the bat, the movie opens with a mockumentary showing the public's reaction to the presence of the space invaders. It is immediately clear that the aliens are very much unwanted, and they have been relegated to a shanty town known as District 9. Their social segregation mirrors that faced by the black majority during the South African apartheid. And just like the victims of apartheid, the aliens must struggle to survive in a society that hates them for being different.

The focus of the movie is on a planned evacuation of District 9, during which the aliens were to be relocated to a place called District 10 (which was really just a concentration camp built to put a check on their population growth). This exercise is led by a militarized organization known as Multinational United (MNU), a company with much interest in alien weapons research. But before they can carry out their plans, they must first serve eviction notices to the inhabitants of District 9.

Wikus van de Merwe (Sharlto Copley) is the man in charge of serving out all those eviction notices. He is a somewhat nerdy guy who, although seems to show little concern for the aliens' plight, is well intentioned enough. He talks us through the entire process, documentary-style, as they make their rounds through District 9. But during a raid of one of the shacks, he is sprayed by a strange black liquid that would eventually alter his DNA and make him more "prawnlike."

In a classic reversal of roles, Wikus is forced to forge an unlikely friendship with one of the inhabitants of District 9, as he finds himself running from the MNU soldiers, who seem bent on securing him for use as a human guinea pig for their inhumane experiments. The reason for this is that the alien weapons are DNA based. And now Wikus is the only human alive capable of using them.

Watching District 9 was like a breath of fresh air. In a movie industry content with serving up the same reheated formula over and over again, this movie proves that you can have aliens and guns and lots of explosions and still be thought provoking at the end of the day.

Posted by Michael Abayomi at 09:09