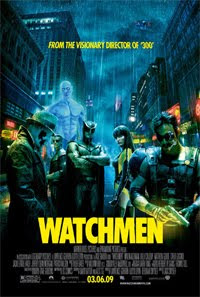 The Hurt Locker, District 9, Inglourious Basterds, Up and of course the present all-time box office champion, Avatar: what do these movies all have in common? Well, they are not only some of my favorites, but they each saw wide release in the year 2009 as well. The one movie I would always remember 2009 for though is Watchmen, mainly because it cemented Zack Snyder's position as one of my favorite directors.

After making his directorial debut with his incredible 2004 remake of George Romero's Dawn of the Dead, and bringing his adaptation of Frank Miller's 300 to the big screen, Zack Snyder decided to prove to the world that his success was no fluke with yet another graphic novel adaptation. This time around it was another one of Alan Moore's creations.

Watchmen gives an account of an alternate history, one in which costumed heroes had risen to fame in the 1940s. In this timeline, Americans had managed to win the Vietnam War, largely due to the involvement of a superhero known as Dr. Manhattan, a nuclear physicist named Jon who through an accident is reborn with the ability to bend matter to his will. This victory has allowed Richard Nixon to run for and secure a third term as the U.S. president. It has also increased the threat of nuclear war with the Russians exponentially.

The year is 1985, and the narrative begins with the murder of a costumed hero known as the Comedian (Jeffrey Dean Morgan), who was at the time of the murder working as a government agent. This prompts an investigation by one of his fellow Watchmen, Rorschach (Jackie Earle Haley), a man labelled a masked avenger/vigilante after all costumed heroes were outlawed 7 years before. He breaks the news to the remaining Watchmen, Nite Owl (Patrick Wilson), Dr. Manhattan (Billy Crudup), Silk Spectre (Malin Åkerman) and Ozymandias (Mathew Goode), and warns them of his theory that someone must be picking them off one by one. Now, they must all get to the bottom of the mystery, while dealing with the possibility of an imminent nuclear holocaust.

If I had the chance to be any costumed hero I wanted to be, then the choice would be an easy one. I would be Rorschach. Not because of his marked dislike of baths, but because he is easily one of the coolest badasses there is, right up there with the likes of Spawn and Wolverine. And a more perfect actor couldn't have been cast for the role. Jackie Earle Haley very much deserved an Oscar nod for his portrayal of a man dealing out street justice in a city teeming with crime and corruption. Pity he had to go and ruin that image by starring as Freddy Krueger in the Nightmare on Elm Street remake.

Zack Snyder has gotten a rather lukewarm reception for two of his previous efforts, his 2010 children's book adaptation, The Legend of the Guardians, and his 2011 action-filled mind bender, Sucker Punch. Now he is returning to comic book material with his reboot of the Superman franchise, entitled Man of Steel, scheduled for release next year. Can't wait to see how well his signature stylized action scenes blend with telling the story of the greatest superhero of all.