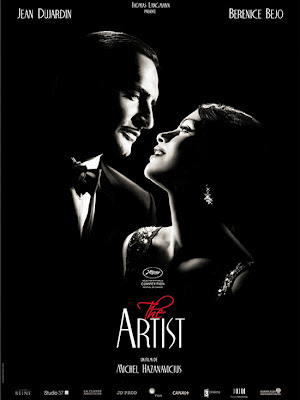 With a list of awards and accolades as long as the Nile, The Artist was a film that had a lot to live up to in terms of expectations. I was one of those who had never even heard of this film prior to the awards season. And even then, it was only after it won the Academy Award for Best Picture did I become committed to seeing it.

My first thought was "How in the world were they going to make a black-and-white silent film work in 2011?" I recently saw the 1927 science fiction film Metropolis, and have to admit that it was a bit tedious to watch by today's standard. The good news about The Artist though, is that while it is presented as a film from the silent movie era, that is where such comparisons end; in its presentation.
In terms of pacing, the story moves along as quickly as any romantic comedy out there today. And that is precisely what this movie is, a romantic comedy. The only reason why its makers decided to present it as a silent movie was to draw a parallel between it and the story it was trying to tell.

That story is about a middle-aged actor of silent films faced with the dilemma of a new era of cinema, the dawn of the talkies. The romance is between him and the rising star of that new era, an actress he had helped bring into the limelight. The main obstacle between that romance, aside from a stale marriage, is the man's pride, with his insistence on sticking to making silent movies. He is a visionary you see. An artist. Hence the title.

I loved the fact that the French movie was lent some credibility by being set in Hollywood, during the outset of the Great Depression. And despite what might seem like a somber backdrop, I was really surprised by how comical the actors' performances were, given their general lack of dialogue. Most especially that of Uggie (the dog), who indeed should have gotten a Best Supporting Actor nomination at the very least.

The chemistry between the two stars is also worthy of note. And the development and progression of their romance also felt somewhat realistic. Overall, there are more reasons why this movie needs to be experienced than not. So if you still haven't seen The Artist, then I suggest that you do so at your earliest convenience.