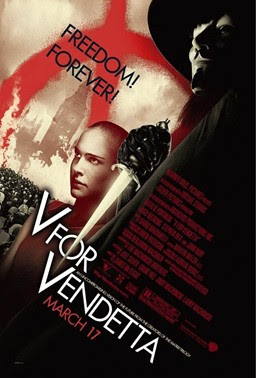 Every once in a while, a movie is released that you really want to see, but then you fail to see it at that key moment before it slips under the radar, and it gets blanketed by newer releases. This is precisely what happened with V for Vendetta, a movie that I finally saw some 5 years after it was released. But whether or not I had seen it in 2005, or even 5 years from now, I don't think I would have come out of it feeling any different. I would still feel just as blown away.

In the 2030s, the world as we know it has been torn apart by war, and once again, only the United Kingdom maintains any level of order. This is achieved through a totalitarian government (Norsefire) ruled by a High Chancellor called Adam Sutler (John Hurt). And just like any totalitarian government, they have their own secret police (fingermen) and detention centers where those opposed to their ideologies are dealt with. Their propaganda is also constantly fed to its people through the media, in this case a channel known as the British Television Network (BTN).

The fascist regime becomes threatened when a Guy-Fawkes-mask-wearing freedom fighter called V (Hugo Weaving) destroys the Old Bailey on November the 5th, and promises to destroy the Houses of Parliament on the same date in the following year. He is aided by a woman named Evey Hammond (Natalie Portman), an employee of the BTN, who he had previously rescued from being raped by fingermen. She had reciprocated by saving his life after he'd broken into the BTN to broadcast his plans.

The government quickly labels V a terrorist, and the Chief Inspector of Scotland Yard, Eric Finch (Stephen Rea), is put in charge of hunting him down. He sees a pattern when V starts murdering members of the group responsible for running a former detention center that was burned to the ground. But during his investigation, he starts to see that the government might be even more corrupt and inhumane than he had earlier thought. Now he is torn between stopping V, or allowing him carry out his plans to unite the people of the United Kingdom against the tyranny of their government.

V for Vendetta is a movie that I love on so many different levels. But it's the character of V himself that steals the show. He is not only charismatic, but very much a daredevil too, insisting on executing his plans and victims alike with as much theatrical flair as he can muster. And Hugo Weaving does a fantastic job of bringing that character to life, in arguably his most iconic role since playing Agent Smith in The Matrix trilogy. I especially loved all his lines, and so I'll leave you with my favorite one:
"Beneath this mask, there is more than flesh. Beneath this mask, there is an idea, Mr. Creedy. And ideas are bulletproof."