The Lord of the Rings (Movie Review) 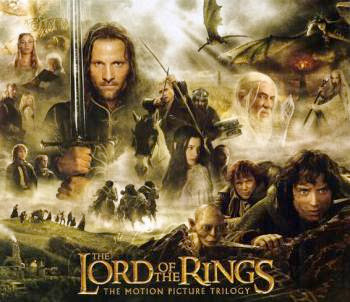 Hands down, the Lord of the Rings is my favorite movie trilogy of all time. Nothing has come close to delivering the same level of spectacular visuals, and I doubt if anything would, except maybe Avatar. But unlike James Cameron's planned trilogy, the Lord of the Rings isn't all eye candy and special effects; at its heart lies a story of epic proportions.

In a place called Middle-Earth, the forces of good and evil are about to face off in an ultimate showdown. The story begins with a hobbit named Frodo (Elijah Wood), who has been entrusted with a magical artifact, a gold ring. Following a visit from the grey wizard, Gandalf (Sir Ian McKellen), Frodo learns the significance of this ring and of the need to destroy it. The ring was forged by the dark lord, Sauron, to aid him in his quest to rule all of Middle-earth, but was lost following a great battle and a series of misfortunes. And now the dark lord wants it back at all costs.

Frodo embarks on a journey to destroy the ring with the Fellowship of the Ring, an unlikely company of nine comprised of men, hobbits, a dwarf and an elf. But the Fellowship is broken after they are attacked by the enemy. Now, Frodo and Sam (Sean Austin) must make the rest of the journey on their own, while those left prepare to face the forces of darkness and the possibility of a dark future, should the two hobbits fail in their quest to destroy the ring.

It took eight years to make the Lord of the Rings, including three years of back-to-back filming. And it shows. The final product is a trilogy that manages to stay faithful to its source material and at the same time offers added insight into the world of Middle-Earth.
Posted by Michael Abayomi at 09:42