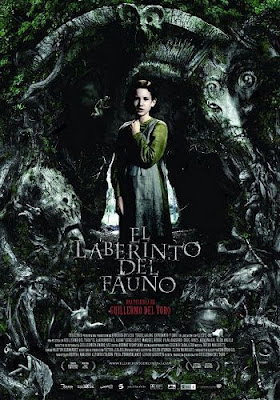 I don't know if you know this, but I am a writer of speculative fiction. I started out in 1998, and self-published three of my stories on Amazon in December 2011 [points to tacky animated book widget thingy in sidebar]. One of the greatest influences on my stories so far has been the works of Guillermo Del Toro. And of all those works, the finest one, and indeed greatest influence on my work-in-progress coming out later this year, is Pan's Labyrinth, a dark fantasy.

Set in 1944, five years after the Spanish Civil War, the film tells the story of a young girl named Ofelia. It opens with Ofelia travelling with her pregnant mother, Carmen, to meet and move in with her stepfather, a soldier stationed at a mill in a rural countryside. The film wastes little time in establishing the fact that Ofelia's stepfather, Captain Vidal, is the main villain. He is the man in charge of weeding out the Spanish Marquis (a group of rebels opposed to the Spanish fascist regime) in the region and he hunts them down mercilessly.

Needless to say, Ofelia doesn't like him very much. The main reason for their friction is Ofelia's love of books and fairy tales, something Captain Vidal sees as trivial and inappropriate for a girl on the verge of becoming a woman. But Ofelia's active imagination proves to be her only respite from the harshness of reality.

After following a dragonfly (of which she is convinced must be a fairy) in true Alice in Wonderland fashion, she discovers an abandoned maze where she finds an ancient faunlike creature. It tells her that she is really a fairy-tale princess from an alternate reality, and she must now complete three tasks for her to reclaim her heritage.

Throughout the movie, we're constantly left wondering whether or not Ofelia's fantasy world is real or make believe. And by the heart-pounding climax, where she is asked to make an ultimate sacrifice in order to proceed, we finally learn that answer for ourselves, but also discover that there is indeed more than meets the eye.

Pan's Labyrinth is yet another filmmaking triumph, and one of the most visually-striking films I have ever seen. I simply cannot stress how awe-inspiring the titular faun looks. Only a genius mind like Del Toro's could craft something so sinister, yet ultimately beautiful beyond words.