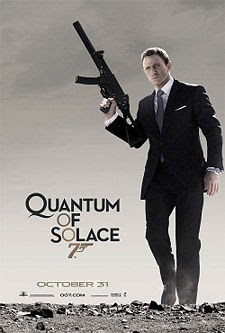 I was one of those who'd laughed themselves almost to the point of hysteria when they'd learnt Pierce Brosnan would be handing over the mantle of agent 007 to a blond, hard-faced actor called Daniel Craig. But following the tremendous success of Casino Royale in 2006, we'd all come to acknowledge our shortsightedness and taken back our snide remarks, only for similar remarks to resurface following the release of the 2008 sequel.

Quantum of Solace kicks off right where Casino Royale left us, with Bond on a trail to exact his vengeance for the death of Jesper, a woman he'd fallen in love with. Following a truly spectacular car chase, the terrorist liaison called Mr. White is interrogated by both Mr. Bond and M, and we learn that he works for a group named Quantum. But Mr. White manages to escape when M's bodyguard, Mitchell, proves to be a double agent and attacks M. Mitchell is eventually put to sleep for his troubles, in arguably the best action scene in the entire movie.

Bond later pokes around the dead bodyguard's apartment where he discovers a new trail to follow. And in keeping with the standard set by previous entries in the series, that trail takes him to various exotic locations, which would eventually culminate in the discovery of the leading member of Quantum, Dominic Greene, and his plan to control the freshwater supply of Bolivia.

It was always going to be tough following in the footsteps of the ground-breaking Casino Royale. Sadly, many seem to consider Quantum of Solace a rather large misstep, even though I feel it is still a step in the right direction. Hopefully though, Skyfall (the next Bond movie coming out later this year) will prove to be the return to form everyone expects it to be.
Posted by Michael Abayomi at 09:57