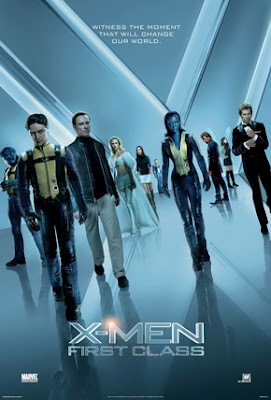 After the shoddy X-Men: The Last Stand brought a disappointing end to the previous series, I was more than pleased when it was announced that a reboot of sorts was in the works. With the new series, they planned on focusing on the individual characters' orgins. Thus X-Men Origins: Wolverine was born, with Magneto's origins next in line for a similar treatment. But after being largely panned by critics, it seemed all hopes of a sequel were dead in the water. Until X-Men: First Class crawled out of the woodwork.

X-Men: First Class opens with the very same scene from Bryan Singer's original X-Men movie, where a young Magneto manages to bend a metal gate after being separated from his parents in a WWII concentration camp. He is later forced to perform a similar feat by a German scientist named Schimdt (Kevin Bacon). He tries but fails, and his mother is killed before he finally shows the scientist the extent of his powers, which were apparently triggered by emotions.

The movie then jumps to a scene where a young Charles Xavier meets a young Mystique, and the two go on to be best of friends right up to college. Meanwhile, an adult Magneto (Michael Fassbender) is actively seeking to exact his revenge on Schidmt and the other German soldiers responsible for the death of his parents.

Schidmt on the other hand becomes a businessman named Sebastian Shaw, and is revealed to be a mutant as well. He believes in the superiority of all mutants and thus sets into motion a number of events that would eventually lead to the 1962 Cuban Missile Crisis, with the hope that regular humans would end up destroying themselves. Now Magneto must set aside his quest for revenge and join forces with Charles Xavier (James McAvoy) and his First Class of mutants if they plan on stopping him.

My first concern upon seeing First Class was how were they going to do an X-Men movie without Wolverine in it. Those initial doubts were put to rest the moment I discovered James McAvoy's take on the character of Charles Xavier. Apparently, Professor X was a real swinger, and a bit of a playboy, back in the 60s. He was the spark that would eventually set the movie on fire, and was helped along the way by an equally competent ensemble.

It's anybody's guess why they didn't call this movie X-Men Origins: Magneto as originally planned. But after what happened with the previous movie, I think I understand why they'd want to distance this one from it. The good news though is there is another Wolverine movie in the pipeline, slated for a 2013 release, and supposedly set in Japan. Hopefully, this would give Wolverine the origin story he truly deserves.