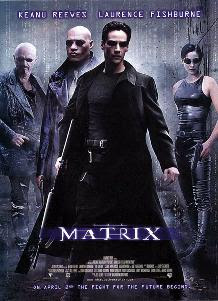 I still find it hard to believe that it's been 13 years since The Matrix was unleashed upon the world. I remember seeing a trailer for it in early 1999 and proclaiming that I had to see the movie at all cost (or possibly die trying). All that was based on getting a glimpse of the numerous ground-breaking action scenes. But nothing could have prepared me for the mind-bending story lurking underneath that shiny exterior.

Thomas Anderson (Keanu Reeves) is a man living two lives. By day, he is a programmer who works for a reputable software company. By night, he assumes the alias of Neo, a well-known hacker in the digital underground. He is also a man searching for answers, answers to questions like "What is the matrix?" Following a meeting with a fellow hacker named Trinity (Carrie-Anne Moss), he is contacted by the very man that could provide all the answers, a hacker/rebel leader named Morpheus (Laurence Fishburne).

Neo is successfully jacked out of the matrix, a virtual reality simulation built to mirror the world as we knew it circa 1999. But what he finds in its place is a future where man is at war with machine. In that future, the entire human race has been enslaved and what little resistance remains forced underground. The skies had been scorched black by the humans in an effort to block out the machine's main energy source, the sun. But the machines proved most resourceful when they'd turned to an alternative energy source: human body heat.

Now, human beings are grown in vast fields where their body heat is harvested, while the matrix serves as a prison for their minds. Those who have broken out of that prison are ruthlessly hunted down by sentinels, specialized machines built solely to search and destroy. Forced to overcome the harshness of reality, Neo must either choose to embrace his destiny as the One (the hero destined to liberate the human race) or come to terms with a future with little or no hope of survival.

As far as science fiction movies go, The Matrix is a fine example of how to strike a balance between believability and over-the-top action. We are constantly treated to various gravity-defying stunts, but all within the context of the matrix (where rules like gravity can easily be broken by those who know how). It is also one of the most influential science fiction movies in recent years, helping popularize such current action movie staples like still motion, bullet time and wire fu.

Despite a disappointingly over-the-top sequel and an underwhelming conclusion to a series ripe with so much potential, The Matrix still retains its original level of pure awesomeness.