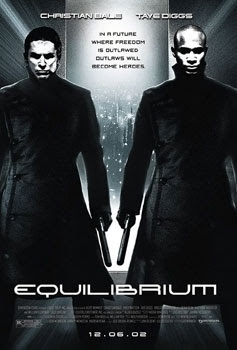 I'll admit, my first thought upon seeing the Equilibrium poster all those years ago was "Matrix Rip-off." It also has a bit of a B-movie vibe to it, which might explain my lowered expectations when I originally saw this film. But the thing about lowered expectations is that they can more readily be exceeded.

The story is quite simple really. Following a devastating World War III, the city of Libria is formed. This city is governed by a council known as the Tetragrammaton and its laws enforced by a police force headed by elite warriors known as Clerics. These Clerics are trained in the art of the Gun Kata (just think Kung Fu with guns, or better yet Gun Fu). But the most interesting thing here is the nature of the laws they enforce.

In Libria, all forms of artistic expression have been outlawed. Books. Music. Paintings. You name it. Its citizens are also required to take daily doses of a drug that suppresses human emotion; a drug called Prozium. The logic behind this is that without emotions like fear, hate and anger, and the presence of art to trigger said emotions, the human race would finally be able to live in peace and harmony. But there is of course a major compromise in those well-thought-out laws; Prozium also takes away our ability to love and experience true joy. So what we get in reality is a community of drones.

Anyone going against these laws is labelled a "sense offender" and is prosecuted as a result (if they aren't immediately gunned down that is). Christian Bale plays John Preston, a Cleric so ruthlessly efficient that he was willing to turn over his own wife to the higher authorities, having learnt that she was a sense offender. The movie opens with a (somewhat powerful) scene where John had in fact been willing to kill his own partner (Sean Bean), after finding out that he too was a sense offender. But things get really interesting when John ends up missing a few doses of Prozium and starts experiencing emotions for the first time in his life.

The problem with Equilibrium is that it's been done before. A post-apocalyptic setting. A dystopian society with a totalitarian government. An elite police force appointed to put everything in check. A rebel movement. These are elements we've seen in books like Nineteen Eighty-Four and more recently movies like The Hunger Games. The real question is what else has this movie done to distinguish itself from others just like it...?

Well. Aside from some truly spectacular shootout sequences, and decent performances from the cast members (Christian Bale, Taye Diggs, Sean Bean and Emily Watson), there isn't much else you haven't seen before. But despite its lack of originality, Equilibrium is a movie worth checking out.