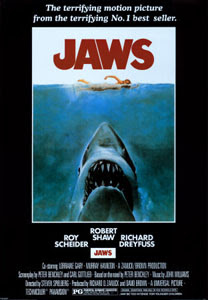 I am very sure that by now pretty much everyone and their grandmother's cat has seen Jaws at least a half dozen times. Ironically, it wasn't until a year ago that I finally saw this 1975 classic for the very first time. And I was immediately surprised by its ability to deliver the thrills despite its age.

Amity Island is a summer resort town that thrives on its main tourist attraction, its sandy beaches. Unfortunately for its inhabitants and tourists alike, its waters are about to be declared unsafe. Following the discovery of the mangled remains of a young woman, it is discovered that a shark had wondered towards the coastline. But due to the effect such news would have on its community, the tragedy is downplayed as a boating accident. However, the lid is blown wide open when a second victim falls prey to the shark, and the boy's mother places a bounty on the shark's head.

There is a frenzy as a large number of bounty hunters race against one another to do the shark in. And a tiger shark is killed in the process, and the crisis seemingly resolved. But following further examination of the first victim's remains by a marine biologist, it is determined that the shark responsible for the attacks is much larger than that captured. Now three men (a police deputy, a marine biologist and a shark hunter) must board a boat and set off in pursuit of the great white shark before it claims any more victims.

Considered to be the first ever summer blockbuster, Jaws is regarded as not only one of Steven Spielberg's finest, but as highly influential too. It paved the way for movies like Star Wars and Raiders of the Lost Ark, but still manages to retain its place amongst such classics. And while it might be lacking in the acting department (at least by today's standards), it still boast some pretty solid, edge-of-your-seat action.
Posted by Michael Abayomi at 09:22