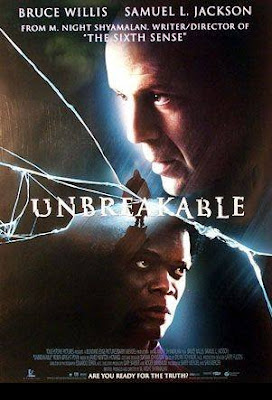 I have never really considered myself a comic book nerd. But then again, what comic book nerd does? What I would admit though is my love of superheroes. Over the years, we've had movies like Spider-man and The Dark Knight set benchmarks that now define our expectations for what a superhero movie should be. But M. Night Shymalan's Unbreakable still stands as a fine example of how to tell a superhero origin story.

Following the derailment of a train, the media is left in awe of its lone survivor, David Dunn (Bruce Willis). He not only managed to survive an accident that left 131 others dead, but he did so without sustaining any injuries. This catches the attention of a comic book collector named Elijah Price (Samuel L. Jackson), a man suffering from a very rare genetic disorder which makes his bones susceptible to breaking.

After the two men make contact, Elijah informs David of his conviction that David must be a superhero. Elijah's theory is that if someone with his type of disorder can exist, a condition that has prompted him to take on the nickname "Glass," then there must surely be another man on the opposite end of the spectrum. A man who is virtually unbreakable.

True enough, David learns that he has never been sick one day in his life, and what follows is a journey of self discovery as he struggles to deal with a crumbling marriage, and at the same time tries to step into the shoes of the chosen one.

The first thing that sets Unbreakable apart from its superhero movie peers is its focus on drama rather than action. Instead of high-flying stunts and massive explosions, what we have here is a movie full of quiet introspection. Then it also has Shymalan's signature character-driven narrative, with a surprise ending that leaves both characters and viewers alike in a state of mild confusion.

M. Night Shyamalan is a brilliant filmmaker who has somehow managed to give us more misses than hits in recent years. But with Unbreakable, he not only created a worthy successor to The Sixth Sense, but he also left us with one of the best superhero origin stories till date.

Posted by Michael Abayomi at 11:45