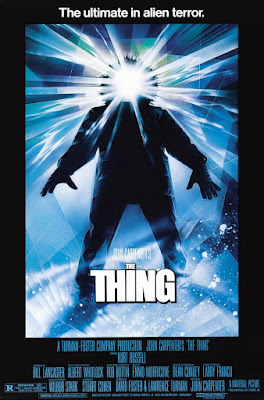 1982 was a significant year for science fiction movies. It was the year that gave us such classics like Ridley Scott's Blade Runner and Steven Spielberg's E.T, two of the greatest science fiction movies of all time. But under their shadow, a different kind of classic lurked. That movie was John Carpenter's The Thing, a cult classic in every sense of the word.

The Thing opens with a scene depicting a dog being hunted down across the winter wastelands of Antarctica. It is chased to an American research facility, but following a string of mishaps, its hunters are killed, while the dog manages to escape into the custody of the American scientists. It is soon discovered that the hunters had been members of a Norwegian research facility, and a trip to their camp (to report the accident) reveals the place to be in ruins, following what appeared to be an explosion. Apparently, there are no survivors.

Later that night, the dog is placed in a kennel, only for it to mutate and consume the other dogs being kept there. It is quickly incinerated, and after an autopsy, confirmed to be an alien capable of absorbing other life forms, after which it takes on their physical appearance, effectively becoming indistinguishable from its victim. The problem is it can just as easily take on the likeness of another human being, and might have done that already.

And therein lies the appeal of this movie: that fear of your fellow man. That knowledge that you can trust no one but yourself. Throughout the movie, there is that sense of paranoia, as each subsequent iteration of "the thing" is revealed to be the least likely candidate. The movie also boasts some truly memorable scares and the right kind of special effects to enhance those moments.

Even though I had been really looking forward to the 2011 prequel, I was not particularly pleased with its execution. While that movie did what it could to flesh out the background of this 1982 movie, it didn't do enough to stand on its own. But I guess that's a further testament to the lasting appeal of John Carpenter's The Thing.

Posted by Michael Abayomi at 10:42