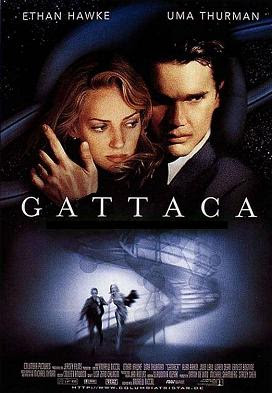 "Like many others in my situation, I moved around a lot... getting work where I could. I must have cleaned half the toilets in the state. I belonged to a new underclass, no longer determined by social status or the color of your skin. No. We now have discrimination down to a science."

Those were the exact words spoken by Ethan Hawke during his opening monologue for this 1997 science-fiction movie. Gattaca explores the concept of genetic discrimination, through a depiction of our future that is not only possible, but dangerously close at hand.

In the not-too-distant future, geneticists have perfected the science of eugenics to the point that parents are able to select exactly what traits they would like their child to inherit. Through the further manipulation of genes, all likelihood of certain diseases and health disorders can be completely eliminated. The result of this advancement is a dystopian society where those born through this selection process (valids) are given preference over those born naturally (invalids).

Ethan Hawke plays Vincent Freeman, an invalid harboring dreams of becoming an astronaut and going off into space. The problem is while he does have the brains and will to fulfil that dream, he does not have the requisite DNA. Not only was he born myopic, he also has a heart disorder that puts his projected life expectancy at a little over 30 years. But he is determined and so he contacts an underground agent of sorts who introduces him to Jerome Eugene Morrow (Jude Law).

Jerome is a valid with an exceptional genetic profile who got crippled in a car accident. He is willing to let Vincent impersonate him by lending him blood and urine samples to enable him gain admission into Gattaca, the agency responsible for space exploration. The plan works but things become complicated when a murder occurs at the space agency, just days before the launch date of Vincent's seminal mission. The place is soon crawling with forensic detectives looking for the killer and Vincent's chances of being exposed as an invalid increases exponentially.

What I love most about Gattaca is its look and feel. It has this 1950s/1960s aesthetic which both manages to be futuristic and old-school at the same time. A good example would be the computer terminal displays that pop up whenever a blood sample is analysed for identification purposes. Then there are its powerful themes and message which we experience as we follow Vincent's struggle to prove his worth (as stipulated by Jerome's DNA).

If you are looking for high-speed car chases and massive explosions, then kindly look elsewhere. But if you are willing to trade those things for a movie that would stay with you long after the credits roll, then look no further. Because that is precisely what Gattaca is, a thought-provoking science-fiction movie that is sure to leave you thinking for years to come.

Posted by Michael Abayomi at 09:04