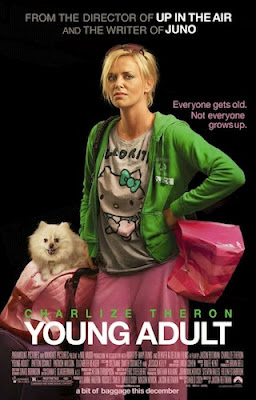 High school never ends. At least not in the way we all hoped it would. We leave the nest, get jobs, get married and start a family. But no one truly ever grows up as evidenced by Jason Reitman's dark comedy, Young Adult.

Mavis Gary (Charlize Theron) is a 37-year-old ghostwriter for a (former) bestselling series of young-adult novels. She is also a divorcee, one who is clearly unsatisfied with her present bachelorette lifestyle. She is on a deadline to turn in the pages of the last book in the series to her editor (J.K. Simmons), but struggles to meet it due to a general lack of inspiration. That was until she'd received an e-mail from her former high school sweetheart, Buddy Slade (Patrick Wilson), who is now happily married, announcing the arrival of his newborn daughter.

Mavis experiences an epiphany and comes to the conclusion that she must journey back to her hometown of Mercury, Minnesota, in a bid to win back the affection of her ex-boyfriend and reclaim the life that should be rightfully hers. Getting there, she forges an unlikely friendship with a man named Matt Freehauf (Patton Oswalt), a former classmate that was almost completely crippled during a beating back in high school. She divulges her plans to him and he takes on the role of reluctant sidekick. And as she slowly executes her plan, she quickly discovers the inspiration her writing needed.

After attaining back-to-back success with both Juno and Up in the Air, it was somewhat surprising to see Jason Reitman take on a movie like this one. It is not only darker than both movies, but also has a main character that is almost impossible to empathize with. But what Young Adult lacks in terms of overall charm it more than makes up for with dry humor.
Posted by Michael Abayomi at 08:37