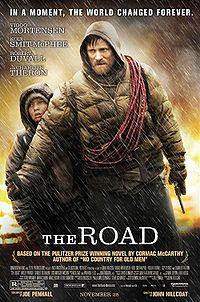 I don't know where it came from, but I've always had this love of all things post-apocalyptic. I guess it's really a fascination with the world coming to an end, at least the world as we know it, a concept that has been explored times without number both in the realm of literature and motion pictures. We've dreamt up every scenario possible, from a nuclear holocaust to our planet's collision with a massive celestial body. What we rarely put into consideration is just how gradual our planet's end may very well turn out to be.

The Road tells the story of a father (Viggo Mortensen) and his son (Kodi Smit-McPhee) as they journey south for the winter through a post-apocalyptic rural America. In this particular vision of our future, all animal life have already become extinct due to a global cataclysm, with plants following suit at a much slower pace. This has left the vast majority of humanity no choice but to resort to scavenging and cannibalism. What brought about these conditions is never revealed, but we are made to understand that it is only a matter of time before the entire planet becomes inhospitable.

Through a series of flashbacks, we learn more and more about the man and his late wife (Charlize Theron). They were lucky enough to be secluded in a cabin home during the outset of the disaster, and it was there that she gave birth to their only son. Over the years, she becomes convinced that there is little hope of any kind of a future, and practically begs her husband to kill her and her son before they fall prey to cannibals. But he refuses, insisting that they must keep hope alive no matter what.

The Road paints a bleak yet beautiful portrait of a world standing on its last legs. But the focus here isn't as much on that portrait as it is on its inhabitants, namely father and son. One of the man's most valued possessions is a gun with only two bullets left in it. He has reserved those two bullets for his son and himself, should the world prove to be as hopeless and irredeemable as his wife had thought.
If you haven't guessed it already, I feel quite passionate about this movie. Very few movies connect with me on both a visual and emotional level. This is one of those few.

Posted by Michael Abayomi at 08:25