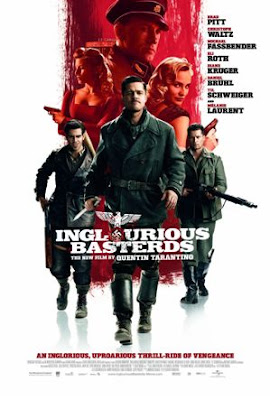 A little disclaimer, ladies and gentlemen; I am a big Quentin Tarantino fan. Wait. Scratch that. I am the biggest Quentin Tarantino fan there is. Over the years, he has left us with cult classics like Reservoir Dogs, Pulp Fiction and Kill Bill. But hands down, his finest piece till date, his "masterpiece," has got to be 2009's Inglourious Basterds.

Set in a Nazi-occupied France in the dying moments of World War II, the movie tells the story of two separate efforts to burn down a cinema full of high-ranking officers of the Third Reich. The first is by the owner of the cinema, a woman that has every reason to hate the German soldiers. Her name is Shosanna (Mélanie Laurent), and she is a Jew under the guise of a new identity in Paris. Her family was hunted down by the German soldier, Colonel Hans Landa (Christoph Waltz), a man popularly referred to as The Jew Hunter. And now she wants her revenge.

Then we have the Basterds themselves, a group of Jewish-American soldiers who have managed to strike fear into the hearts of the German soldiers. They are led by the charismatic Lieutenant Aldo Raines (Brad Pitt), a man to whom each member owes "a hundred Nazi scalps taken from the heads of a hundred dead Nazis." Having also learnt about the premiere of a German propaganda movie right there in France, and the attendance of prominent members of the Third Reich, the Basterds plan on infiltrating the event, and bringing down the building with as much explosive firepower as they can smuggle into the place.

This is one movie just oozing with perfection. It does not belong in a cinema, or on a DVD, but in an art gallery somewhere. It should be placed there as the definitive example of how to make a great movie. I could go on and on listing everything I loved about this film, but then we'd be here all day. So instead I'll just say that this movie has some of the best dialog I've heard in any film, and I found myself hanging on every word, most of which were spoken in French and German (with subtitles of course).

There are a few movies out there that simply demand a second viewing for you to fully appreciate them. Inglourious Basterds is such a movie. But regardless of whether you've seen it before or not, this movie never loses its ability to blow you away (no pun intended).

Posted by Michael Abayomi at 09:28