The Other Guys (Movie Review) 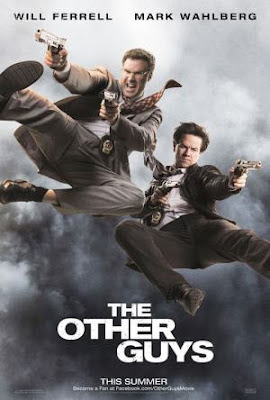 Growing up in the late 80s/early 90s, one of my favorite movie genres was the buddy cop action comedy. I remember I used to (and still) love films like Beverly Hills Cop, Lethal Weapon and Men in Black. And of course more recent variations on the formula like Taxi (2004), Kiss Kiss Bang Bang (2005) and Sherlock Holmes (2009). But of all the recent movies in the genre, one of the most hilarious is 2010's The Other Guys.

Detectives Allen Gamble (Will Ferrel) and Terry Holtz (Mark Walburg) are the butt of all the jokes in their police department. They are "the other guys," both relegated to desk jobs and forced to live under the shadow of two superstar detectives, Christopher Danson (Dwayne "The Rock" Johnson) and PK Highsmith (Samuel L. Jackson). But when both hotshots meet an unexpected end, Terry sees it as their opportunity to step into the spotlight. The trouble is there is a second pair of detectives (played by Damon Wayans, Jr and Rob Riggie) who wish to claim the spotlight for themselves by undermining both Terry and Allen.

This is one laugh-out-loud movie that falls just shy of slapstick. With numerous pop culture references covering implausible concepts like a Chechnyan version of Dora the Explorer, this movie could be considered the definitive parody of the buddy cop genre.

---signed, Dirty Mike and the Boys
Posted by Michael Abayomi at 08:56