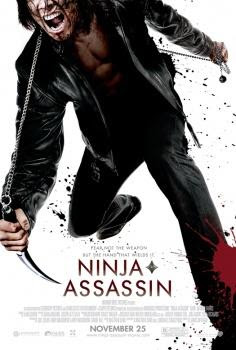 Having just reviewed The Matrix over the weekend, a movie produced by Joel Silver and directed by The Wachowski Brothers, it seems somewhat coincidental that I pick another film where they all share production credits, though one on the opposite end of the critical acclaim spectrum.

Ninja Assassin tells the story of, you guessed it, a ninja, who just so happens to be an assassin (What ninja isn't?). This one is named Raizo (played by South Korean pop musician, Rain), and he is a lethal killing machine, just like the title suggests. But things take an unexpected turn when he decides to turn against his ninja kin, having also decided against killing for material gain alone. Now, Raizo must fend off wave after wave of fellow (ninja) assassins sent out to do him in, and at the same time come to terms with his decision to go renegade.

Never (in recent memory) have I come across a movie that greatly resembles the Mortal Kombat series of fighting games like this one. The only things missing here are health bars. Just think super-stylized fight scenes filled with bucketloads of blood and you'll get an idea of what to expect. These ninjas are quite clearly in the wrong line of work; they could easily make a fortune selling their blood as blood donors. But that wouldn't make for a compelling story now, would it?

The only reason why movies like this work is because they never try to be anything they aren't. I went into Ninja Assassin expecting scene after scene of mindless action. And I got precisely what I paid for. But in the end, I feel we need to see the occasional guilty pleasure like this one, if only so we could better appreciate the real movie gems when we come across them.
Posted by Michael Abayomi at 08:55