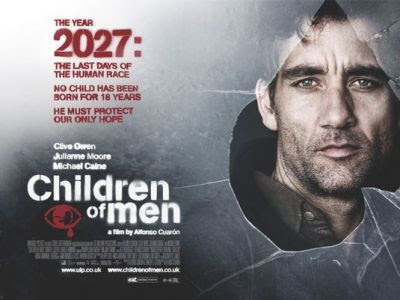 Now here is a world that I never get tired of revisiting. After his brilliant takes on the Charles Dickens classic, Great Expectations, and J.K. Rowling's Harry Potter and the Prisoner of Azkaban, Children of Men is quite possibly Alfonso Cuarón's greatest adaptation till date.

Children of Men paints a portrait of a dystopian future where the human race lies on the verge of extinction. For some reason (which was better explained in the book apparently), all women have grown infertile. Due to this unexpected development, people do precisely what people do best: succumb to mass hysteria. Governments crumble as nations are plagued by riots and war. But amidst all the chaos, the United Kingdom struggles to maintain law and order.

The year is 2027, 18 years since the last baby was born. The city of London is teeming with illegal immigrants and asylum seekers, most of whom are kept in cagelike detention centers. The problem is the city is already filled beyond capacity, which is evidenced by the street corners overflowing with garbage. Add to that the near-constant fear of several terrorist groups and you'll get a feel of just how messed up things have become.

The most haunting aspect of this depiction of our future is how ultimately familiar it looks. Rather than scenes filled with flying cars and robocops, what we get is a version of London that looks just like present-day London, only rowdier of course, with hints of technological advancement here and there. This minimalistic approach only goes on to further enhance the story.

Clive Owen plays a civil servant (Theo) who must help transport an illegal immigrant (Kee) to the safety of a group of scientists known as The Human Project. The catch is Kee is (unexplainably) pregnant, and might thus hold the answers to mankind's infertility, and The Human Project is the only organization capable of finding those answers. So our two protagonists must journey through a dystopian countryside and refugee camps to reach their goal. They are joined by the likes of Julianne Moore, Michael Caine and Chiwetel Ejiofor, creating an unforgettable ensemble.

Children of Men is as much a triumph in filmmaking as it is in storytelling. There are a number of scenes that will stick with you long after the credits roll. Like the opening coffee shop scene. Or the countryside ambush scene. Or the childbirth scene. Or the climatic war scene. Okay. Now I'm just rambling. This movie is a definite must see.