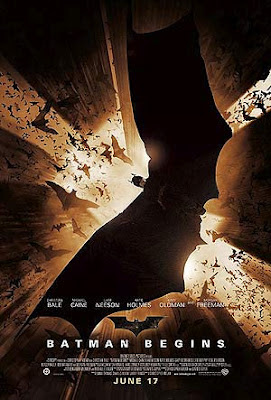 Truth be told, I originally wasn't too keen on Christopher Nolan's take on the Dark Knight's origin. I mean, heck, Batman doesn't even make an appearance until well over an hour into the movie. For that reason, I felt it didn't feel like a Batman movie (or a superhero movie for that matter).

Needless to say, I didn't see what all the critics were going on about, proclaiming it to be the finest superhero movie ever made (at the time). So of course, when The Dark Knight came out three years later, I avoided it like the plague, even though it had broken all sorts of box office records and whatnot. But it was that movie that allowed me to enjoy Christopher Nolan's vision of The Caped Crusader for the first time.

I recently rewatched Batman Begins, and couldn't believe how utterly brilliant it was. I guess I was originally blinded by my expectations of what a typical superhero movie should be, expectations set by the likes of Spider-man 2. What I love the most, aside from a stunning all round performance by the cast members, was Cillian Murphy's portrayal of Scarecrow. His was a character just as tortured as the victims of his medical experiments.

There was also the overall atmosphere of the film, which was inspired by films like Blade Runner. Then the fact that we were given some psychological insight into what motivates Batman, with a direct view at his greatest desires and deepest fears. The only other movie till date that has shed more light on the character was Batman: Under the Red Hood, my personal favorite (animated) superhero movie of all time.

Right now, as the world awaits the final instalment of Nolan's trilogy, I suddenly feel that The Dark Knight Rises can't come soon enough. Here's hoping that it doesn't go the way of X-men: The Last Stand.
Posted by Michael Abayomi at 08:02