Z is for Zuma 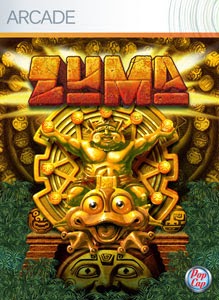 We've reached the end of another Blogging from A to Z challenge. Over the course of the past 26 days or so, I have been blogging my way through the alphabet, along with more than a thousand other participants. My theme for 2014 has been video game franchises.

Since I started the challenge with a casual game series, I think it is only fitting that I end it on a similar note. And as far as casual games go, things don't really get any more so than with Zuma, a tile-matching puzzle game developed by PopCap Games.

Originally released in 2003, the game involved controlling a frog idol mounted on a spinning disc, who could spit out colored balls. Each level featured a different path into which a string of balls were constantly fed by an off-stage conveyor belt. The objective was to eliminate all the balls, by chaining together three or more balls of the same color, before the balls reached the skull at the end of path.

Zuma's simple but fast-paced gameplay would eventually propel it to win the 2004 Game of the Year award from RealArcade. An enhanced version, known as Zuma Deluxe, was released shortly thereafter. But the game didn't receive a proper sequel until 2009, when Zuma's Revenge was released. It retained the previous games' core mechanic, but introduced a bunch of new power ups and boss battles.

In 2010, PopCap released Zuma Blitz on Facebook, the only version of the game to feature competitive and cooperative multiplayer.
Posted by Michael Abayomi at 09:00