X is for Xena: Warrior Princess 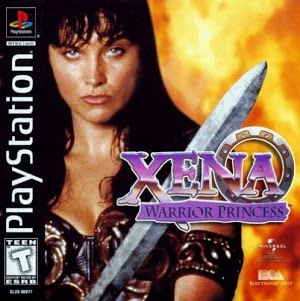 Movie and television tie-ins are nothing new in the video games industry. In fact, some of the most successful video games are based on material from other entertainment mediums. One reason for that is the fact that these games get to benefit from a preexisting fan base. But more often than not, these tie-ins tend to be nothing more than fan service, the Xena: Warrior Princess tie-ins being a perfect example.

Xena: Warrior Princess was released in 1999, for the Sony PlayStation. It was a third-person action-adventure game, with a story revolving around Xena's quest to save her companion, Gabrielle, who at the start of the game was kidnapped by the evil sorceress Kalabrax. The game featured hack-and-slash gameplay, as well as her trademark chakram, a Frisbee-like, long-range weapon, which could also be used to trigger switches within the environment.

A second tie-in, called Xena: Warrior Princess - The Talisman of Fate, was also released in 1999, for the Nintendo 64. It was a 3D fighting game that featured characters from the TV show. The story behind the game involves a tournament that must be held to decide which character can lay claim to the titular Talisman. Its fighting mechanics were fairly basic, but noteworthy for supporting matches between four simultaneous players.

Additional Xena: Warrior Princess tie-ins were also developed for the Game Boy Color and PlayStation 2, which were released in 2001 and 2006 respectively. But like the two aforementioned games, neither one managed to please anyone outside its target audience, namely die-hard fans of the show.
Posted by Michael Abayomi at 09:00