P is for Plants vs. Zombies 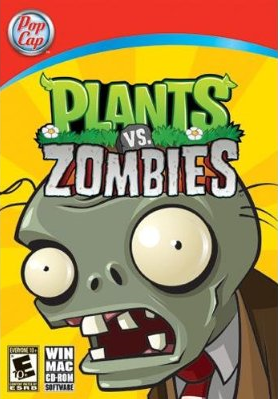 What do you do if you look out your window and find a horde of zombies just waiting to trample over your lawn and eat your brains? You plant some flowers and mushrooms of course! Well, at least that's the logic behind Plants vs. Zombies, a series of tower defense games developed by PopCap.

The first game was released in 2009 for the PC & Mac. It was presented in a beautiful 2D art style that leaned towards bright and whimsical. At the start of each level, the player is allowed to pick from a number of plants, each with its own defensive or offensive capability. Once the game begins, the player can start putting their defense together. But each plant requires a certain amount of sun (the primary resource) to plant, and subsequent replants are limited by an energy meter.

The player earns sun by picking it up as it falls from the sky at intervals on daytime levels, or from certain plants like the sunflower. The playing field is divided into several lanes, and the zombies shamble towards the player's house through each one at random, until a final wave where they launch an all-out assault. The level is won by defeating this final wave, or lost by failing to prevent the zombies from getting into the player's house.

It is a simple mechanic that is easy to get into. But the real challenge comes in the later levels, where the player must apply different tactics based on the type of zombies they face. As a fan of the game, I can attest to just how addictive the game quickly becomes once you get into it. Completing each of the early levels rewards you with a new plant. You also face a huge variety of zombie types, my favorite being the Michael Jackson Thriller zombie, who comes complete with backup dancers.

The second game in the series, Plants vs. Zombies 2: It's About Time, was released as a free-to-play download for iOS and Android in 2013. It was praised for its implementation of the freemium model, which ensured you didn't have to spend any money to enjoy the complete game. The third game in the series, Plants vs. Zombies: Garden Warfare, was released in 2014. It was a class-based, third-person shooter, which marked a significant shift from the 2D tower defense gameplay of the first two games.
Posted by Michael Abayomi at 09:00