I is for Indiana Jones 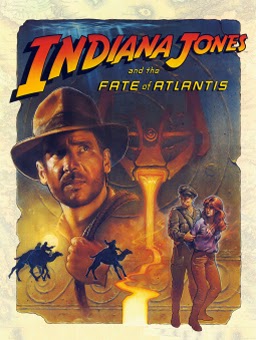 A quick confession; I am a sucker for well-made graphic adventure games. Everything from Broken Sword, to Broken Age, to console-only titles like Heavy Rain. In fact, if I had my way, most of the games I have chosen to highlight for the 2014 Blogging from A to Z Challenge would be replaced with graphic adventures.

That said, the graphic adventure genre is one that has certainly seen more than its fair share of highs and lows. It was all but relegated to a niche audience following the move to 3D graphics in the mid 90s. But it did experience its own golden age before then, and the Indiana Jones graphic adventure games were just some of the great games produced during that era.

Indiana Jones and the Last Crusade: The Graphic Adventure was released in 1989, alongside the third movie in the franchise. It was built using the same engine that powered other LucasArts classic adventure games like Manic Mansion and Monkey Island. It mirrored the same adventure seen in the movie, but was still well received by fans of the genre and franchise alike.

Indiana Jones and the Fate of Atlantis was originally released in 1992, and re-released in 1993 as a CD-ROM enhanced edition that featured full voice acting and sound effects. Unlike the previous game, Fate of Atlantis was based on an original storyline written specifically for the game. It was equally well received, and both games are considered graphic adventure classics.

Right now, the graphic adventure genre is experiencing a sort of renaissance, all thanks to a resurgence of story-driven games from the likes of Telltale Games and Quantic Dream. More on that in the days to come.

Posted by Michael Abayomi at 10:15