Q is for Quake 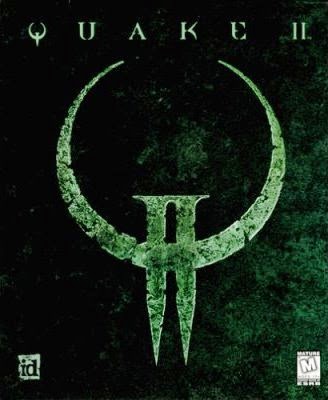 In my early days of gaming on the PC, my favorite genre, by no small margin, was the first person shooter (or FPS as it is more commonly referred to). id Software is often credited for creating that genre, or at least for helping popularize it with highly-influential games like Wolfenstein 3D, Doom, and Quake, all of which had kick-started some of the genre's most respected franchises.

Quake was released in 1996, and remains notable for a number of reasons. It was the first game in the FPS genre to allow online multiplayer. It also featured music and sound effects composed by Trent Reznor, lead singer of the band, Nine Inch Nails. It was also one of the first games to use full 3D graphics, with character models composed of polygons, as opposed to 2D sprites. The engine powering the game was also one of the first to support hardware-accelerated 3D graphics.

Quake II was released in 1997, and it was powered by a more robust game engine than the one used in Quake (whose color palette was often criticized for being predominantly brown). The game was never intended as a true sequel to the original game, and was in fact only called Quake II when id Software failed to secure any of the other names they wanted to use. As a result, there was no continuity from the storyline in Quake.

Quake III: Arena was released in 1999, and unlike the previous two games, focused solely on multiplayer game modes like Deathmatch and Capture the Flag. Matches could be played online or on local area networks, as well as with AI-controlled opponents known as bots, much like in the multiplayer FPS series, Unreal Tournament.

A fourth game, Quake 4, was developed by Raven Software and released in 2005. It served as a direct sequel to Quake II.
Posted by Michael Abayomi at 09:00