Y is for Yoshi 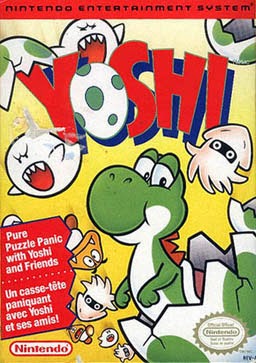 Even though the 2014 Blogging from A to Z Challenge is close to an end, it is never too late to squeeze in another Nintendo mascot. After all, we can never have too many of those. And here is one that also shares the same universe with Mario, and as such, has made appearances in many of his games and spinoffs.

Yoshi was first introduced in the 1990 Super Nintendo game, Super Mario World. He is a green dinosaur with an affinity for apples. From the moment he was hatched from his egg, he assumed the role of sidekick to both Mario and Luigi. They could ride on his back, and he could swallow certain enemies whole, or stomp on them with his boots. He was as much an integral part of the game as other new mechanics like the flying cape.

Following his debut on the Super Nintendo, Yoshi's next appearance was on the NES and Game Boy, where he was the titular star of Yoshi, a puzzle game of the falling blocks variety. It was released in 1992 and developed by Game Freak. It was followed by another puzzle game called Yoshi's Cookies, this time of the tile matching variety, which was developed by Bullet-Proof Software and also released in 1992.

But Yoshi is perhaps best known as the star of Super Mario World 2: Yoshi's Island, a prequel to Super Mario World which was released in 1995 on the Super Nintendo. The game had a unique art style that helped distinguish it from other Mario games, and an equally unique take on platforming; Yoshi must protect Baby Mario by carrying him safely across each stage. The game was well received by critics and was also considered a commercial success.
Posted by Michael Abayomi at 09:00