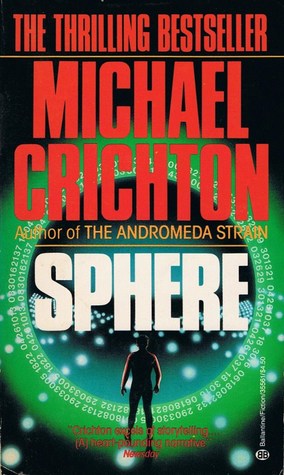 Sphere is the second of the two Michael Crichton books I am highlighting for the A-Z Challenge. It was published in 1987, and subsequently adapted into a movie in 1998. It tells the story of a team of scientists who have been assembled to investigate the origins of a spaceship that has been lying on the ocean floor for more than 300 years.

Norman Johnson is the oldest member of that team, a middle-aged psychologist who'd written a report for the U.S. government, describing how to handle first contact with Unknown Life Forms (ULF), a request he'd assumed was nothing more than a joke. The team is transported from one of several naval ships gathered above the spacecraft, to a deep sea habitat that has been built to better aid in their investigation.

During their first expedition, they discover that the spacecraft was not of alien origin, but actually an American space vessel from the future. According to the records logged on its computers, it was caught in a black hole and then sent back in time, where it subsequently crashed into the ocean. But further investigation reveals a strange spherical artifact in the ships cargo hold, which was clearly not man-made.

Shortly thereafter, the team is severed from the rest of the fleet by a storm, and they are told they would be stranded in the habitat for at least one week. This leaves them with nothing to do but continue their investigation, the purpose and origin of the sphere eventually becoming an obsession for the individual members of the team. But their study is disturbed by a series of strange occurrences. This includes the sudden manifestation of a ULF named Jerry, who communicates with them through the habitat's computers.

Sphere is without a doubt my favorite Michael Crichton novel. It perfectly captured the sense of isolation experienced by the inhabitants of the habitat, and at the same time, the feeling of distrust that crept between them when things started to go wrong. Most of that is reminiscent of the John Carpenter movie, The Thing, another science-fiction story that explored our inherent fear of the unknown. Except Sphere delves even deeper into the darkest recesses of the human mind.
Posted by Michael Abayomi at 08:00